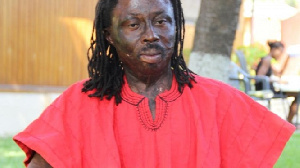 Traditional priest, Nana Kwaku Bonsam has said that he would make much impact in the upcoming parliamentary election due to the several developmental projects he has done for the residents over the past years.

Nana Kwaku Bonsam, who is contesting the Offinso North seat in the Ashanti region as an independent candidate in an interview on the ‘Best Entertainment Show’ on Friday morning mentioned that his gods have assured him of victory.

“It’s true I am contesting in the December elections due to certain bad developmental activities in the area. Bad roads, bad markets, there are a lot of bad things in this area, the people are not happy. The good people of Offinso North are not happy, the reason I have decided to contest to bring development to the citizens."

“I have followed due process; my forms have been submitted to the electoral commission. I can’t lie; I have done all that is needed to contest as an independent candidate. Just within two weeks, I have built four markets for the residents here. I am sure of victory, my gods have promised me of victory,” he told Halifax Ansah-Addo.

Kwaku Bonsam who has already gained some level of popularity in the constituency added that :“I have been to all the constituents, done projects, even more than what the current MP has done all these years. I am the adwuma wura. I have no problem with Akufo-Addo but his MP, he’s a lazy man. He has done nothing for the people. I will do more if elected. My works cover the period show my commitment.”

The Offinso North constituency for the first time is being contested by four contestants.

Incumbent member of Parliament and Deputy Minister for Local Government Hon. Augustine Collins Ntim is seeking his fourth term on the ticket of NPP whilst an educationist and first-timer Mr. Ofosu Acheampong Caesar is representing the National Democratic Congress (NDC).

I didn't see the greatness of Maradona at all. But I can't stop thinking about it
Carvajal will miss 4 matches of Real Madrid and plans to return to the Derby with Atletico
Messi always went a lot without the ball. Best of all, this problem was solved Guardiola
Trent on the Premier League calendar: something Needs to change. We do not have time to recover, it leads to injuries
Emir Kusturica: Ronaldo is an ideal, he earned a lot of money, but where is his personality? What can he tell you? Nothing
Maradona is the best dribbler with a phenomenal number of goals and assists. But is it true that he won Serie A alone?
Italian championship. Juventus will play Benevento, Atalanta Miranchuk against Verona, Inter away to Sassuolo
Source https://www.ghanaweb.com/GhanaHomePage/politics/2020-Polls-Kwaku-Bonsam-fires-up-for-victory-in-Offinso-North-1092034

UG polls unscientific, insensitive to the feelings of those burdened by Akufo-Addo’s policies – PI

Don’t be like Trump, concede defeat if you lose 2020 polls - Akufo-Addo told

Sod-Cutting Performed For Construction Of Obokese University Of Excellence

‘Nothing To Forgive:’ Soyinka Speaks About Relationship With Gowon

No Pardon For Rapists, Says Sanwo-Olu

FACT-CHECK: Who started the Free SHS programme, NDC or NPP?

Maradona: The best to ever played football, says Solskjaer |

We are not oblivious of the enormous tasks ahead - Police

NPP has laid a strong foundation for take-off - Akufo-Addo

2020 election results to be collated in three stages — EC

‘I’ve Learnt Not To Worry About Public Perception’

Don Jazzy’s mother showers prayers on artist, dad as they both celebrate their birthday

”He Threatened To Kill Me” – Lil Frosh’s Ex-girlfriend, Gift Opens Up About Their Abusive Relationship

Akufo-Addo is bathing in corruption - Mahama

I never wanted to leave Hearts of Oak - Samudeen Ibrahim