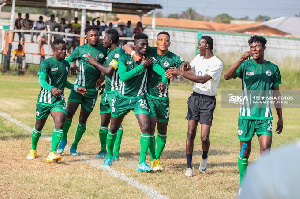 King Faisal survived relegation last season by the skin of the teeth and know it was a hellish experience until the final day of the competition.

They will be hoping for a good start against WAFA who finished third last term.

Faisal wrapped up their preparations for the start of the season with a 1-0 win over Eleven Wonders in Techiman.

Returnee striker Ibrahim Osman found the back of the net again in pre-season for the Insha Allah Boys.

They will be lead on the bench by former Wa All Stars coach Nurudeen Ahmed.

WAFA have lost their head coach Prosper Narteh Ogum to big boys Asante Kotoko and have brought in an experienced Guillermo Hamdan Zaragoza.

The 29-year-old Spaniard will be taking charge of his first-ever top-flight club.

The Sogakope-based have lost some key players including talisman Augustine Boakye who signed for Austrian side Wolfsberger.

Defender Ibrahim Abukari, who captained them last season, will miss their season opener with reports saying he is abroad looking for a club.

But Eric Asamany has regained full fitness and ready to star for the boys.

Ghana’s ‘beautiful’ democracy ‘envy of many outside Africa’ – French Ambassador

PPA to fully digitise procurement by 2023

My target is to win gold for Ghana – GBF President

9 perish in accident on Sawla-Wa road

Year in Review: Controversial business deals of govt that raised suspicion in 2021

Award contracts based on merits not politics – Western Regional Minister

Edmund Addo to play in the Europa League with Sheriff Tiraspol

Business Word for the day: Remittance

I could have solved Francis Sosu’s problem - Derek Oduro

FLASHBACK: We were worst of after the overthrow of my husband - Liman’s wife recalls

FLASHBACK: We were worst off after the overthrow of my husband - Liman’s wife recalls

NET2 presenter vs IGP case: You don’t know the people you are dealing with, you’re a young lawyer – Judge

Expect more back and forth in Parliament – ACEPA Boss

Ghanaians need to feel the impact of their taxes – Statistician

Hearts of Oak players have been overused - Laryea Kingston

Today in History: You’re a blessing to NPP and Ghana - Mahama heaps praises on Kufuor

Meet Sumaila Abdallah: The only Ghanaian to win FIFA award

Drama in court in former IGP vs Kweku Annan's case