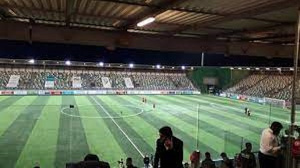 Football loving Libyans are celebrating the return of international football to their country, after their national team hosted Tunisia in a Total Africa Cup of Nations (AFCON) qualifier on Thursday (25 March 2021) in Benghazi.

Although the visiting Tunisian team defeated Libya 5-2 at the Martyrs of Benina Stadium, it was a historical match which marked the return of international football home after seven years.

“This is good for us in Libya to have international football return. It has taken hard work to make sure that the facility was okay to host this big game,” said the Libya Football Federation (LFF) President and member of CAF Executive committee Abdulhakim Alshalmani.

He pointed out that they will continue to work hard to ensure that other stadiums like those in Tripoli also meet the requirements to be ready to stage international matches.

Faisal Ali Albadari, Libya skipper said it was a good feeling to be playing international football on home ground. “We are very pleased that we are finally playing back on home soil. Yes, it is sad that fans still cannot come and fill the Stadium because of the challenges of COVID-19, but we are glad about this development,” added Albadari who features for El-Hilal in the Libyan Premier League.

Omar Malik, a Libyan football fan said he was pleased CAF had finally cleared Libya to host games. “We have been missing watching international football for many years. It is not easy following our teams all the time on TV,” he added.

While slightly over 300 fans made it to the stadium to cheer the Libyan team, many around the country were glued on their TVs to celebrate the moment.

LFF Secretary-General, Abdunnaser Ahmed summed it up by saying it was like a party hosting international football again after seven years. “This feels so good to watch the boys on home ground. I know we still have a lot to do to improve and promote football in Libya,” he added

Video: “I’m not mad as Ghanaians see me”

I was overlooked by Inter Allies and Medeama

It would be best for health workers to vaccinate against coronavirus

No pastor in Ghana can face me

Kyei-Mensah-Bonsu refused to be contested, want NPP to use same to elect flagbearer – Nyaho-Tamakloe

Jeffery Schlupp is a tremendous player

'There is a loss of trust in political leadership' – Abu Sakara

Medikal has refused to pay the money he borrowed from me

Respect and salute the media

Namibia to partake in 5th GITFIC conference in Ghana

Hearts of Oak beaten by Ashgold in Obuasi

Parliament under my leadership won’t shirk its responsibilities – Bagbin

It is tough – Mfantseman MP Confesses on parliamentary duties

It is tough – Mfantseman MP speaks on parliamentary duties

Kwaku Bonsam reveals what he uses to solve spiritual problems

PL: Chelsea beat Palace to move back into top four

Your Favourite Female Celebrities Without Their Makeups On » ™

WHO to support Tanzania in fight against rabies

The Upper East Uncompleted Theatre: A setback to the region’s cultural heritage

Bunso Arboretum: an exceptional tourist site in the Eastern Region