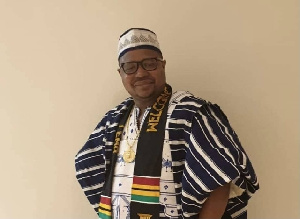 The Chairman of the London South Branch of the National Democratic Congress (NDC), Clir Dominic Mbang has, on behalf of the executives and the entire membership, congratulated the party faithful on the occasion of the celebration of its 29th anniversary.

A statement issued by the group noted that even though the party recently lost its founder, Flt Lt John Jerry Rawlings and, thus, for the first time in 29 years, the anniversary of the party was celebrated without him, “his values, principles, ideals and that of other founding fathers continue to live with us and guide us”.

“As the most successful political party since the inception of the 4th Republic, it is imperative that we allow these ideas, principles, and values embedded in the party by the founding fathers, guide us as we strive to capture the power and alleviate Ghanaians from the hardship they are enduring from the NPP government by capturing power in 2024,” the statement added.

It continued: “This we can do if as party members, we are united and do not allow selfish interest to take the better part of us."

"Ghanaians are counting on the NDC to once again rescue the country from the abysmal performance being demonstrated by President Akufo-Addo and Bawumia led government. This duty we cannot afford to fail”.