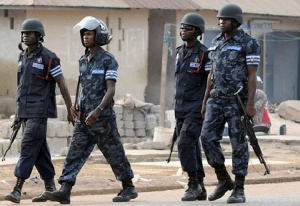 Police have picked up three suspects in connection with a robbery incident at Alabar Market in Kumasi, the Ashanti Region capital on Friday afternoon.

Reports indicate that the three suspects are assisting with investigation.

“They are on detention to assist in police investigations, whiles a manhunt has been launched for the arrest of the remaining robbers,” Citi News quotes the regional police command.

The attack by four gun-wielding persons on motorbikes on Friday, October 30, 2020, that has claimed one life adds to the rising incidents of gun attacks in the region.

Earlier reports on Friday’s incident suggest that two people died, however, police have confirmed that only one person was killed.

The three persons picked up by police are Hamza Nuhu, 22; Salifu Iddrisu, 18 and Ali Razak, 18, according to Citi News coverage of the incident.

“They were arrested during a police pursuit in which Hamza Nuhu was shot in the thigh. He is currently receiving treatment at the Komfo Anokye Teaching Hospital under police guard," Citi News reports.

Police say they have mounted a search for four other suspects said to be part of the robbery gang that attacked the market.

Three other victims who sustained injuries are receiving treatment at the Manhyia Government Hospital.

Premier League clubs will no longer be able to sign players under 18 due to Brexit
Pirlo about 3:0 with Dynamo Kiev: I'm happy. Juve must always play to win
Giroud on possible departure from Chelsea: Let me enjoy the win, I scored 4 goals. Then let's see
CSKA's last home game in the Europa League. Finally win?
Casillas-Ronaldo: just 750 goals? You can do better 😏
PSG President on 3:1 with Manchester United: We are fighting for the Champions League and always show ourselves in important moments
Lazio pulled out a draw with Borussia thanks to a controversial penalty: Schulz crashed into Milinkovic-Savic, the Serb dived beautifully
Source https://www.ghanaweb.com/GhanaHomePage/NewsArchive/3-arrested-over-Alabar-Market-robbery-incident-1097101

#TrendingGH: Mahama will still lose 2020 elections despite his 'Fa No Nyinaa' promise - Electorates

Yagaba MP narrates how he escaped an assassination attempt

Today in History: Prove yourself at debates not 'slangs' on Peace FM - Mahama to Nana Addo

Flashback: If a prophet is genuine, what he prophesies must come to pass – Dr. Lawrence Tetteh

41% of women in politics victims of gender-based violence – Report

Why I Took A Break From Music Industry: Niyola

Stop blaming coronavirus for messed up economy – Mahama to Akufo-Addo

President Akufo-Addo has not taken any bribe

Miley Cyrus had ‘too much conflict’ with Liam Hemsworth

Development has been decentralized – CODA CEO

December 7 should remain a holiday – CODEO

‘I have been one of the victims of coronavirus’

Akufo Addo Is Corrupt And He Must Go – Ibrah One » ™

Video: “I am not happy with the last revelation I saw about the elections”

Show us your credibility - NDC to President Akufo-Addo

I saw Akufo-Addo on a throne, Mahama standing in a cloud of darkness - Owusu Bempah

My transplant scar makes me feel like a warrior

Aviance Ghana workers threaten strike over half salaries since lockdown; HR refuses to respond to messages after reading it

Man at the centre of $40,000 bribery scandal to take legal action against NDC, other accusers – Kweku Baako

National Security Operatives are not authorized to use sirens – Security Expert

I was better footballer than Roberto Carlos — Adjah Tetteh

Najeeb Yakubu features for Vorskla in 1-0 defeat to Volochysk