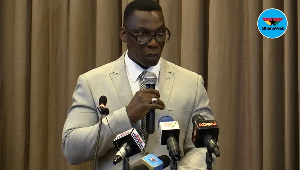 Commissioner of Insurance at the National Insurance Commission (NIC) has said the introduction of the Motor Insurance Database (MID) policy has recorded 554,000 electronic stickers since its introduction.

The Commissioner, Justice Yaw Ofori speaking in an interview with GhanaWeb indicated the growing confidence in the system, as most Motorists now buy valid insurances with approved entities.

“On the performance of the MID, the system has recorded over 554,000 electronic stickers, so far, indicating the growing confidence in the system, as most Motorists now buy valid insurances with approved entities,” Mr Ofori said.

He explained, “all old policies issued prior to January 20, 2020, have been uploaded onto the database, and their new electronic stickers will be issued upon renewal.”

Mr. Justice Ofori further disclosed that the National Insurance Commission (NIC) together with the Motor Traffic and Transport Department (MTTD) of the Ghana Police Service, will soon commence a nationwide exercise aimed at enforcing the Motor Insurance Database (MID) policy.

The objective, according to the Commissioner will see the formation of a joint task force which will clamp down on patrons and dealers of fake motor insurance in a bid to reduce the number of uninsured vehicles on our roads, while protecting the interest of policyholders and the general public.

On January 20, 2020 the NIC issued a directive to all insurance companies to cancel the issuance of manual stickers until they signed up to the new Motor Insurance Database (MID).

The move by the commission was to get rid of fake motor insurance stickers that were plying the roads and to ensure the safety of lives and property.

The NIC had earlier disclosed that insurance companies in the country are losing approximately GH¢390 million of gross revenue annually to fraudsters who issue fake insurance stickers to unsuspecting vehicle owners.

Hans-Dieter flick: Bayern players had to overcome the pain threshold to beat Sevilla
Julen Lopetegui: Neuer is an incredible goalscorer. Sevilla didn't use their chances
You should see Goretzky's goal again. Muller's goal and levandowski's discount - the magic of mutual understanding 🤝
Ivan Rakitic: We saw how important Neuer is for Bayern
Mueller - the best player of the match for the UEFA super Cup between Bayern Munich and Sevilla
Sevilla have five defeats in matches for the European super Cup. This is an anti-record
Bayern won 4 trophies in a year. To repeat Barca's record, you need to take two more
Source https://www.ghanaweb.com/GhanaHomePage/NewsArchive/554-000-stickers-issued-electronically-under-MID-policy-NIC-1030423

‘Thanks To Banky W For Changing My Life’

#BBNaija: Neo, Vee, Laycon, Nengi & Dorathy awarded N1million each for their performance in the Lipton Ice Tea and Peace task

‘A punctual society is key to achieving socio-economic growth’

Emirates to resume flights to Zimbabwe on Oct. 1

Shut Up If You Have Nothing To Say – Bernard Aduse

AMA to establish Christmas village for yuletide amidst COVID-19

November to get busy as Ghana Premier league resumes

Policeman, two others remanded over murder of taxi driver

No Need To Withhold Nurses’ Salaries After Suspension Of Strike – NLC

Traders At Okaikwei Demand Head Of MCE Over Destruction Of Goods, Military Assault

Charles Bissue Vs Mireku Duker: The inside story

I fell in love with Mahama but… Ken Agyapong

‘You Make Me Feel Loved’

The NDC Is The Only Party To Resurrect The Creative Industry

We’ll not accept results of a flawed election – Mahama

Koku Anyidoho in a lovely pose with Kufuor