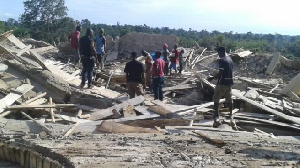 The church building has been reduced to a pile of rubble

Reports from the Akim Oda Government Hospital indicate that six victims rescued from the collapsed church building at Akyem Batabi, have been treated and discharged on Thursday.

Kwame Ampadu-Agyei, administrator at the Hospital said about 24 victims were sent to the hospital with 15 already dead, six treated and discharged, one referred to the St Joseph hospital in Koforidua while one died on Thursday leaving one, on admission.

Rescue efforts are still ongoing to save dozens believed to be trapped under the debris, by the combined rescue teams including; the Ambulance Service, Military, Ghana National Fire Service, Police and the National Disaster Management Organisation (NADMO) visited the reporter scene on Thursday.

Amo Lartey, Director of Operations at NADMO, disclosed that the National Security was providing additional excavators to FastTrack the rescue operation.

Prophet Akoa Isaac, the founder of the collapsed Church of Prosperity, in an interview described as unfortunate the collapse and death of members of the church and added that the building had stalled for lack of funds.

He said church activities had slowed due to the coronavirus restrictions and disclosed that 52 congregants were at the church for fasting and prayers, on that fateful day.

Khabib reacted to Maradona's death: One of the greatest. Millions love football because of it
Gasperini on 2:0 with Liverpool: This is unbelievable. Atalanta played their football
Simeone on Maradona's death: Impossible to believe. He infected us with football. This is a great loss for me
Bayern and city are already in the Champions League play-offs. Who is already with them, and who is in step?
Conte Pro 0:2 from Real Madrid: We saw the difference between them and us. Inter made too many gifts
Liverpool have never scored a goal against Atalanta in their home Champions League match
Liverpool lost at home for the first time in 2 years! Gave Atalanta a couple of goals and never hit a goal
Source https://www.ghanaweb.com/GhanaHomePage/NewsArchive/6-vicitms-of-the-collapsed-church-building-treated-and-discharged-1091890