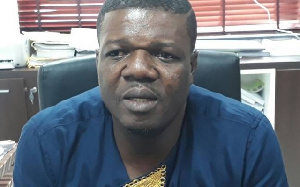 South Dayi lawmaker, Rockson-Nelson Dafeamekpor has raised issues with the grounds upon which the election petition filed by John Mahama at the Supreme Court was dismissed.

In a tweet after the dismissal of the petition on Thursday, March 4, he said “A Petition that discloses a reasonable cause of action is unmeritorious?”

The seven-member panel led by the Chief Justice Kwesi Anin-Yeboah dismissed the petition on Thursday, March 4 saying it was without merit.

During proceedings, the two witnesses told the court that they were sent by the Chair of the Electoral Commission (EC) to Mr Mahama at the time of the collation of the final results in the strong room. In their absence, the results were then announced.

A Petition that discloses a reasonable cause of action is unmeritorious?

“Weep not child Weep not my darling With these kisses let me wipe away your tears, The ravening clouds shall not be long victorious, They shall not long possess the sky-Jupiter shall emerge-again”. Whitman

Presidential election kicks off in Chad

Death toll of tropical cyclone Seroja rises to 174 in Indonesia

Kenya’s elephant number increases at 2.8 percent annually in past 30 years amid fall in poaching

Has Morocco carried out its first drone strike in Western Sahara?

Families must pay attention to children

‘2021 Population and Housing Census will depend heavily on technology’

No pastor in Ghana can face me—Avraham Moshe boasts

Govt and police have been too lenient on money doublers

Prof. Gyampo on why Kasoa teen killers should not be blamed

You’re the lifeblood of our party – Dr Boako

It’s just our jobs we do, we don’t get bribed to do it

Police investigates pastor over death of two minors in his car

Every Family In Nigeria Has A Paedophile – Singer Temmie Ovwasa

Asafo cold store operators lament over losses due to’ dumsor’

US warns of 'consequences' if Russia acts 'aggressively' in Ukraine

US customs seize 22 snails, prekese from American who arrived from Ghana

I Would Win A Grammy Award – Singer Harrysong

My hallmark is to produce only female musicians

Nobody wants to be poor, time to redefine our values – Oppong Nkrumah

Security analyst details how thief bewitched his family, robbed them at Kasoa

The media did a good job – GJA Vice President

It's just our jobs we do, we don't get bribed to do it - Joe Osei Owusu

‘Up to 80 percent’ in Sicily refuse AZ vaccine |

Kasoa ritual killing: Nobody wants to be poor, time to redefine our values – Oppong Nkrumah

Check out photo of Dangote before becoming a billionaire

Robotic lizards could be the future of disaster surveillance, say researchers

GRA tax payments to be fully automated from May 2021