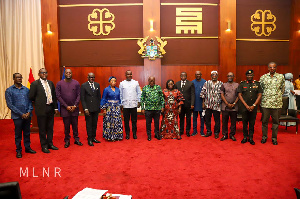 President Akufo-Addo with members of the commission

The President, Nana Addo Dankwa Akufo-Addo has called for an ‘immediate and ‘proper’ demarcation of Ghana’s land and maritime boundaries.

Delivering a speech at the inauguration of the reconstituted Ghana Boundary Commission, President Akufo-Addo said the current state of Ghana’s boundary demarcations exposes the country to economic and security dangers.

He has therefore directed the Commission chaired by the industrious and resourceful Minister for Lands and Natural Resources, Samuel Abu Jinapor to as matter of urgency ensure proper marking of the country’s boundaries.

“A careful analysis of our borders show numerous recorded cases of destruction of the boundary markings of demarcated land and maritime borders. This situation exposes us to security, economic and other developmental implications including setting the tone for potential conflict with neighboring countries.

“It is therefore of urgent need to find more sustainable and vigorous means of managing our land and maritime boundaries as well air space.”

President Akufo-Addo laid particular emphasis on “demarcation, documentation and protection of our borders as well strict adherence to the statutory international laws to safeguard the sovereignty and interest of our country”

“Since it’s establishment in July, the commission has facilitated boundary negotiations in Togo which had been pending since 2017. This has led to rebirth of its Togolese equivalent and led to a roadmap for the amicable resolution to the negotiation before the end off this year.

“There is also ongoing efforts to settle the issue with Burkina Faso in the Kassena-Nakana West district and Bawku District both in the Upper East Region.”

President Akufo-Addo said that the presence of rich mineral resources along the country’s borders “makes it imperative that we conclude these matters once and for all and forestall any potential needless conflict.”

On his part, the Chairman of the Committee, hon. Samuel Abu Jinapor said that the relevant and integral role the committee plays in fostering peace and security between the country and its neighbors is not lost out on the members of the commission.

He said the commmission will collaborate with relevant stakeholders and adopt internationally-recognized best practices to safeguard the Ghana’s territorial integrity.

“The work of the Boundaries Commission is consequential to the peace and security of our nation as it borders on the territorial integrity of our country. We are aware of the devastating impact of unresolved border disputes on states and their people. The Bakasi Peninsular conflict, the renewed conflict between Israel and Palestine and the crisis between Sudan and South Sudan over oil rich boundaries are just a few of the examples.

“We don’t therefore take this responsibility lightly. The implications of our actions or inactions on the security of the nation are grace and we’ll do our best to ensure that we safeguard through peaceful international means the territorial integrity of Ghana.”

The reconstituted Ghana Boundary Commission board has Samuel Abu Jinpor, Minister for Lands and Natural Resources, as it’s Chairman.

'What is your true position on the E-levy?' - NDC MPs asked

NSMQ 2021: We were cheated during Grande Finale – Presec contestants lament

CAF Inter-Club Competitions: How Ghanaian Clubs have performed after winning the first leg at home by 2-0

One robber shot dead, two others in custody

Effects of E-Levy on digitalisation will be brief - NDPC boss

Highlights from 2022 budget debate: The alleged impersonation, disagreements and fights

What were the South Africans thinking? - Felix Kwakye Ofosu reacts to FIFA ruling

How Alban Bagbin walked out of meeting over Kevin Taylor insults

'My government’s record in agriculture is impressive' – President Akufo-Addo

Over 52% of Obuasi residents are into agriculture not mining – MCE

2022 Budget: Tyranny of the Minority will never be allowed to stand - Napo

You can't apologize on our behalf – Afenyo-Markin to Sam George

Headache, body pains show the coronavirus vaccine is working in your body – Nsiah-Asare

Private sector appeal for reduction in cost of borrowing

The ghost town inside one of the richest neighbourhood in Accra