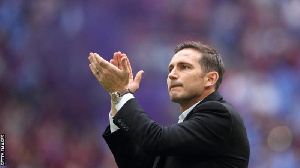 Lampard has been sacked by Chelsea

The Twitter page of Accra Great Olympics is fast gaining prominence as the home of savagery and hilarious posts.

The handlers of the page have since last season entertained their followers with memes, catchy phrases and statements that elicit engagement from their followers.

Woe betides you if your club loses to the club with most nicknames in the history of Ghana football because you will be trolled with memes and funny tweets.

Even when they lose, the handlers of the page still find ways to troll themselves.

Frank Lampard’ exit as Chelsea coach triggered conversations over whether Chelsea were a bit harsh on their legend and where next Lampard will end up as a coach.

Characteristically of the page, the club hopped on the ‘ya gyae’ trend to express their rejection for the offer.

Though on a lighter note, it demonstrates the club’s belief in coach Yaw Preko who replaced ailing coach Yaw Annor Walker recently.

The former Ghana winger has managed four points from his first two games including a draw against league leaders Karela United.

Antonio Cassano: Does Conte understand that he is not Guardiola? Inter were just ridiculous in the Champions League
Juve will win again if Ronaldo is not in the starting line-up. They need a quality centre-forward, they don't grow as a team. Ventola about Cristiano
The head of the LGBT group of City fans: Burst into tears after scoring a goal in the match for the exit to the Premier League. I felt that after so many years of longing, we are rising
Ibrahimovic and Mihajlovic will sing the song I am a tramp at the Sanremo Festival
Sociedad coach on the draw with Real Madrid: If we had scored 2-0, everything would have been different. Fair result
Only Raul and Casillas were younger than Vinicius when they played their 100th match for Real Madrid
Zidane on the draw with Sociedad: We lost two points. We had obvious moments in the first half

U-20 AFCON: Percious Boah shoots ahead in race for tournament golden boot

If they did it to us, should it continue? – How Ken Agyapong fought Ursula over closure of NDC radio stations

We will not be reckless – Muntaka vows after the rejection of Oppong Nkrumah, two others

Why COVID-19 vaccinators are not wearing gloves

I could not penetrate her after attempting to defile her - Accused

“You Deserve All The Bad Things In Life”

LGBTQ+: Addai-Nimoh lauds Akufo-Addo for not yielding to pressure

We did not provide guarantees to IPPs - World Bank

LGBTQI: Addai-Nimoh hails Akufo-Addo for standing against Homosexuality in Ghana

Shatta Wale And Stonebwoy Gifts Bola Ray $60,000 On Live Radio As He Celebrates His Birthday[Video]