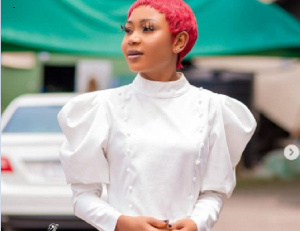 She reportedly took the test on Friday following the sentencing by the Accra Circuit court.

Akuapem Poloo who was convicted on her own plea after changing her not guilty plea to guilty was given a custodial sentence on Friday after a pregnancy test conducted on her came out negative.

The outspoken actress was slapped with three charges of publication of obscene materials, engaging in domestic violence, a conduct that in any way undermines another person’s privacy or integrity, and engaging in domestic violence namely conduct that in any way detracts or is likely to detract from another person’s dignity and worth as a human being.

The Circuit Court in Accra presided over by Her Honour Mrs. Christiana Cann sentenced Akuapem Poloo on all three charges to 90 days each but the sentence she said will run concurrently, meaning she will serve three months.

Speaking to Lantam Papanko on Starr Today, on Starr FM on Friday, her lawyer Andrews Kudzo Vortia said the Covid result is expected to be ready on Monday.

He said, his client would be taken to the Ankaful Prisons if the test is negative.

Lawyer Vortia has also served notice he is going to file an appeal against the sentencing on Monday.

Brief facts of the case presented to the court by the prosecution led by Chief Inspector Agartha Asantewaa were that the complainant is Bright K. Appiah, the Director of Child Rights International Ghana.

According to the prosecution, on June 30, 2020, the accused person celebrated her son’s seventh birthday and she took her nude pictures together with her son who was also half-naked and posted same on her Instagram page which went viral on social media.

Chief Inspector Agartha told the court that the complainant petitioned the Director-General Criminal Investigations Directorate and the matter was referred to the Domestic Violence and Victims Support Unit.

Akuapem Poloo, she said was arrested and in her caution statement, admitted posting the nude picture with her son unintentionally.

#FixYourMother: How well have you treated your mother? – Otiko Djaba asks