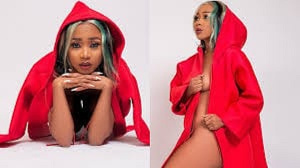 The Apesemakahene of Mampong Akwapim, Nana Yirenkyi I, says Ghanaians should not associate jailed celebrity Akuapem Poloo with Akwapims because she is not one.

Nana Yirenkyi I says she should be regarded as a Ghanaian, for starters, since she doesn’t even know the Akuapem town she comes from.

Speaking on Simply Showbiz on TV3 on Saturday, April 17, the Mampong Akwapim Apesemakahene told how he met Rosemond Alade Brown once in the heat of the controversy “and she didn’t prove to me that this is the town that I am from”.

“She told me she would come back again but here we are. So for me I can say that we should understand that she is a Ghanaian. She is our sister and when our own Ghanaian sister is going through trouble we should feel the pain.

“[But] we should remove the ‘Akuapem’ name from her name because for me to tag that Akuapem people are happy or not [is neither here nor there].”

His comments come a day after the socialite was handed a 90-day prison sentence by an Accra Circuit Court presided over by judge Christiana Cann for pleading guilty to three counts of publication of obscene material, engaging in domestic violence that undermines another person’s privacy or integrity and engaging in domestic violence that detracts or is likely to detract from another person’s dignity and worth as a human being.

The court proceedings were initiated by the Executive Director of Child Rights International, Bright Appiah, after Akuapem Poloo posted a nude picture of her squatting in front of her seven-year-old son on his birthday in June, 2020.

Ramos is unlikely to play against Sevilla. He has been out of the Real Madrid squad for two days
President of Bavaria: There will be no expensive transfers. There is no need for them, we have an incredibly strong team
Statement from Real Madrid, Barca and Juve: We regret that the founding clubs of the Super League signed a commitment to UEFA yesterday. This is inconsistent
The amount of the Holand deal may reach 200 million euros. Real Madrid won't pay that much
Ronaldo lives for goals. Playing against him is fun. Milan defender Kier on Juve striker
Ter Stegen on the national team: I wish Neuer to play without injuries. I want to get a place in the squad, playing well for Barca
The president of UEFA will propose to exclude Real Madrid, Barca and Juve from European competitions for 2 years (Cope)