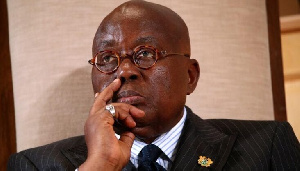 Government says it is not surprised neither is it disappointed at a “desperate attempt” by the John Mahama campaign to tag President Nana Addo Dankwa Akufo-Addo corrupt.

This derives from a video making rounds on social media showing President Akufo-Addo receiving a $40,000 “donation” – said to be bribe – from a man and a woman.

According to a statement released the Minister of Information, Kojo Oppong Nkrumah, the video is doctored and it shows then candidate Akufo-Addo in 2016 receiving a donation for his campaign.

This has, however, been strongly rejected by the National Democratic Congress (NDC), which has called out the president to come clean and explain the circumstances under which the money was received in his presidential office.

The party’s Member of Parliament for Ketu South Constituency, Fifi Fiavi Kwetey, thinks the president cannot absolve himself from bribery even if it demands consulting traditional deities.

Let’s go to Nogokpo if you are not corrupt – Fifi Kwetey to Akufo-Addo but Mr Oppong Nkrumah’s statement said it is only characteristic of the NDC to rely on “waging a campaign of lies, fake news and fabrications [and] the opposition candidate and his party have now sponsored the doctoring of this video and superimposed it with new voices to create the false impression that it is a post-2016 event showing the President receiving bribe”.

“Whilst we are not surprised by the new low by the opposition candidate and his party, we remind Ghanaians that they should expect more of such falsehoods and fabrications in the days leading up to the election.”

The statement perceives the Mahama campaign as failed, therefore resorting to fake news and fabrications as well as an amendment of his earlier promises as the only hope to salvage his defeat in the hands of President Akufo-Addo.

“We are not disappointed that Mr Mahama and the current NDC leadership will stoop so low with obvious fabrications which they hope can change the minds of Ghanaians. It is and will always be their stock-in-trade.”

It cautioned the public and the media to be vigilant in order not the fall prey to the “antics” of persons desperate to tarnish the image of the country “for their own selfish, parochial, partisan ends”.

“For the avoidance of doubt, President Akufo-Addo has never been involved in any untoward conduct, let alone take a bribe.

“The original footage of the incident shows it clearly as a 2016 campaign donation and nothing more,” the statement concluded.

Lampard on Havertz: De Bruyne and Salah were the same age when they came to Chelsea. They went away, came back and became legends of the Premier League
Ronald Araujo: Barcelona will fight to win La Liga. We know the results will come
Klopp on transfers: The central defender would not have won us the match against Burnley. I won't cry like a 5-year-old if I don't get what I want
Barcelona could sell Dembele in the summer if he does not renew his contract. Manchester United, Bayern Munich, Juve and Chelsea are monitoring the situation
Kylian Mbappe: I will not sign a contract with PSG to say in a year that I want to leave. If I do that, I'll stay
City Defender Dias: Seeing an opponent unable to even hit and feeling powerless is the greatest pleasure
The chances of Mbappe and Holland joining Real Madrid in the summer are very slim. The club has almost no money for transfers
Source https://www.ghanaweb.com/GhanaHomePage/politics/Akufo-Addo-has-never-taken-bribe-Govt-shoots-down-viral-video-1124606

Erica Replies Troll, Who Described Her As A Tactical Beggar

Video: “I’ve Opened My Doors For A Serious Boyfriend”

How Isaac Asiamah blew $320,000 on supporters in Egypt - Aide reveals

The sad story of how Reverend Frimpong Manso was disgraced

Oppong Nkrumah reacts to his reappointment

Patronage of artefacts tumbles at the Accra Arts Centre

Mpohor Wassa East district in search of investors for 1D1F

I will work to fix the roads — Osei Mensah assures residents

Water and Sanitation for the Urban Poor supports AMA with PPE

Profile of Abu Jinapor, Minister of Lands and Natural Resources-designate

‘God Is Embarrassing The Looters’

Isaac Atanga powers Nordsjaelland to victory in friendly against Viborg

Afenyo-Markin slams NDC over this…

Transfers are out of my hands, says Klopp

No matter how long it takes, be patient your reward will come – Minister designate NPP youth

Profile of Francis Asenso-Boakye, minister-designate for works and housing

Public advised to engage the services of certified electricians

Covid-19 having a strain on Hohoe Municipal Hospital – Medical Superintendent

Appointments not entitlements, opportunity to serve-Nuworsu

We will don’t condone any criminal act –GMA.

Ogidi Brown Smokes The Peace Pipe With Cryme Officer, Welcomes Him Back On The Record Label

Zidane, Villas-Boas under the cosh, Zlatan boosts Milan – what to watch in Europe this weekend

I will forever be grateful to you- Freda Prempeh

‘You Can’t Shine With Hate In Your Heart’, Says Wizkid

Aspiring DCE for Kadjebi, Alhaji Tanko Yakubu outlines his vision for the District

BBNaija’s Prince And Dorathy Drag Each Other On Social Media

Don’t Allow Anyone Force You Into Marriage, You Won’t Get Rewarded For Marrying Early Or Late

Yaw Dabo Recounts How He Used Play Football During His Childhood Days, Reveals Why He Stopped Playing

Normalize Praying For Your Woman