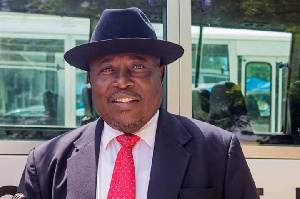 After carefully studying the Agyapa Royalties deal and assessing the possible risk of corruption and conflict of interest, Martin Amidu, the former Special Prosecutor says he has come to the realization that the brain behind the whole transaction is President Nana Addo Dankwa Akufo-Addo.

Martin Amidu reckons that the deal was cooked by the President and Finance Minister Ken Ofori-Atta to serve their personal interest at the expense of the country.

“The President’s directive and instruction to you that he was acting as a judge in his own case should be told to the marines and imbecile foreign republic not Ghanaians. I have no doubt that he is the suspected master architect behind the Agyapa Royalties Transaction after being convinced by the Ministry of Finance, which is the only rational explanation for his granting of Executive approval under twenty-four hours on March 2020 to a request made to him with volumes of documents on March 23, 2020 without the knowledge of the Secretary to the Cabinet”.

Amidu suspects that the deal was hatched by the Presidency and the Finance Minister and few members of the ruling party.

“I can now say as a citizen of Ghana on the basis of the Agyapa Royalties Limited Transaction reports that the transaction was suspiciously conceived by the Minister of Finance and the Presidency and implemented to serve only a few persons within the NPP,” he said.

In points 36 and 38 of his 27-paged statement, Amidu said that throughout his investigations on the Agyapa deal, he observed the ultimate beneficiaries of the deal were neither Ghanaians, NPP or Voltarians but a rather a small number of people who are related to the President.

“Throughout the painstaking examination, analysis and anti-corruption assessment of the deal in my capacity as Special Prosecutor, I could not find a Dombo, Busia or the Golden Stool of the Ashanti Kingdom or anybody from the Volta Region from the New Patriotic Party …..” Amidu wrote.

Amidu was responding to a statement by the presidency which sought to address some of the issues he raised in his resignation letter.

The Presidency said that Amidu frustrated their attempts to get him an office and could not be blamed for his inability to work in an office of his choice.

Barcelona, Real Madrid and Bayern are Interested in Barella. Catalans want to sign Inter midfielder in the summer (gds)
Huntelaar returned to Schalke. 37-year-old striker signed until the end of the season
Christian Pulisic: My faith in God has grown significantly. I don't know how I would have coped without feeling like he was looking out for me
In Turkey, a retrial will be held in the case of the harassment of Turan to the wife of the singer Berk
Ole Gunnar Solskjaer: Bruno not tired. If I ask him, he will never say this
Hundreds of people with color blindness complained about the colors of the uniforms in the Liverpool - Manchester United match. The hosts played in red, the guests-in dark green
Setien's former assistant at Barca has taken charge of Andorra Pique
Source https://www.ghanaweb.com/GhanaHomePage/NewsArchive/Akufo-Addo-is-the-suspected-master-architect-behind-Agyapa-deal-Martin-Amidu-1120736

Seth Paintsil could leave Austrian side SV Ried in January

97 persons arrested for not wearing facemask

I'm not ready to resign, your agenda to bring me down won't work — Chairman Wontumi to NPP executives

Carlos Ahenkorah Has Developed A Repugnant Hobby Of Displaying Gross Irresponsibility In His Utterances And Actions!

Election Petition: I have not targeted Jean Mensa – Tsatsu Tsikata

Post Coronavirus: Why oil prices will keep rising in 2021

I won't end my career in Ghana – Agyemang-Badu

‘This pandemic is not a joking matter’ – Former Chief Justice cautions

Side-chick of Dr Kwaku Oteng, Linda Achiaa congratulates him on international key to the city of Stonecrest award

Security agencies must be resolute in enforcing COVID-19 - Peace Council

Ghana plans to issue $3.9 billion in bonds in first quarter

Ghana plans to issue US$3.9 billion in bonds in first quarter

'We are committed to an expeditious trial' – Mahama’s lawyer

“Kwabena Kwabena Has A Powerful Gift; He’ll Be A Prophet In Future”-Ohemaa Mercy » ™

Clergyman appeals to president to cut down ministerial appointments

We were not ready to reopen schools - Kofi Asare

‘Pay Attention To Your Parents, Make Time For Them’

Bagbin pledges to build on feats

Michael B. Jordan and Lori Harvey baecay in St Barts