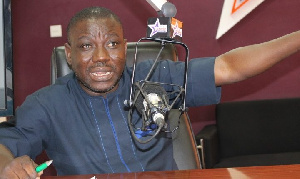 Member of Parliament for Bolgatanga Central, Isaac Adongo says his constituency lacks proper development because President Nana Addo Dankwa Akufo-Addo has threatened to sack any minister that agrees to award him contracts and projects.

According to Mr. Adongo, even the ones he is able to secure, he is discreet about it because he would not want to implicate any minister.

“I am saying that even when I lobby and I get contracts, I have to be circumspect in disclosing who gave me that contract…They may sack the minister [ because giving me contracts will] promote me in Bolga. If they are aware that this minister is treating me with kid gloves. And I have examples of them here. And I have those projects here. Privately, I can mention all of them to you,” he told the host of the Word Community Watch Show.

“The government itself is denying its citizens because it is the most incompetent government that has borrowed over the roof but cannot show anything for," he added.

To him, he has excelled as a Member of Parliament ever since he took over the Bolgatanga Central Constituency.

Klopp on firmino: the Team is an orchestra, and Bobby plays 12 instruments in It. He is important to us
Antonio Conte: I Don't think Real Madrid can cry about their losses. It's funny that the media write about their problems with the squad
Lewandowski on the cancellation Of the Golden ball: it's not that important. Such prizes are something extra
Salah can play with Atalanta. He became ill with the coronavirus
Klopp on injured: no News. I have no idea who will play for Atalanta. Why should we give them information?
Barcelona are thinking about signing Garay due to Pique's injury
Pepe apologized for the red in the match with Leeds: there is no excuse for My behavior. I am deeply sorry
Source https://www.ghanaweb.com/GhanaHomePage/politics/Akufo-Addo-is-very-vindictive-Isaac-Adongo-cries-over-constituency-neglect-1092016

There’s no difference between some politicians and armed robbers

Mahama enskinned as King of Development

I can easily die for Rev Obofour and his wife, Queen Ciara– Ayisha Modi

Dumsor Looms As IPPs Vex Deputy Minister For Accusing Them Of Politics Despite $1.44 Billion Debt Owed Them

Fugitive Prophet Bushiri will not get fair trial in SA, says Andile Mngxitama

Pope Francis: I know first-hand what COVID patients are going through

21 Savage in mourning after brother stabbed to death in London

At least one drowned, several missing in attempt to reach Greece

Vote Akufo-Addo; His Ambulance Was There For Me When I Had An Accident – Samini

Akufo-Addo To Opens Phase One Of Obetsebi Lamptey Interchange Today

Funny Face Again, Says He Had Intercourse With His Former Wife Recently » ™

‘Being Divorced Is Nothing To Shame Anyone For’

Now ‘real hope’ to end Covid-19 with vaccines: WHO chief

I Will Build 21 Universities If Elected Governor – Godwin Maduka

Man wrestles puppy from alligator’s jaws without dropping his cigar

Another Guy Outsmarted With The ‘Circle’ Move, Takes Home Soap As A Phone » ™

If We Keep Our Promises, APC Will Retain Power In 2023

Russell Tovey was told being openly gay would ‘hinder’ his career