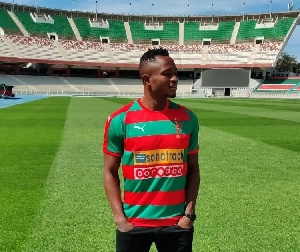 The 24-year-old was officially announced player of the club after penning a three-year deal with the Algerians.

The lethal forward arrived in Algeria on Friday after Dreams FC confirmed his departure from the club.

Esso left the Still Believe lads after an impressive half-a-season campaign, scoring eleven goals in 16 games in the Ghanaian top-flight.

Prior to moving to Algeria, Esso had played for Ebusua Dwarfs and Accra Hearts of Oak in the Ghana Premier League.

Munich Police: Wanted Bundesliga competition, missing 9 years ago
Mateu Laos will judge the Champions League final with a 99% chance, the Euro final with a 90% chance. Iturralde about the Spanish referee
Barca are Interested in Ajax midfielder Gravenberch. Manchester United and Juve are also eyeing the 18-year-old
Lewandowski scored his 200th goal for Bayern in the Bundesliga. Only Muller has more goals for one club in the German league
Mendy caught a panenka from Aguero in Chelsea's match with Man City
Koeman's assistant on 0:0 with Atletico: Barcelona could have won, we had our chances. Winning La Liga is still possible
Busquets was taken to the hospital. He was bleeding from the nose after a collision with Savic