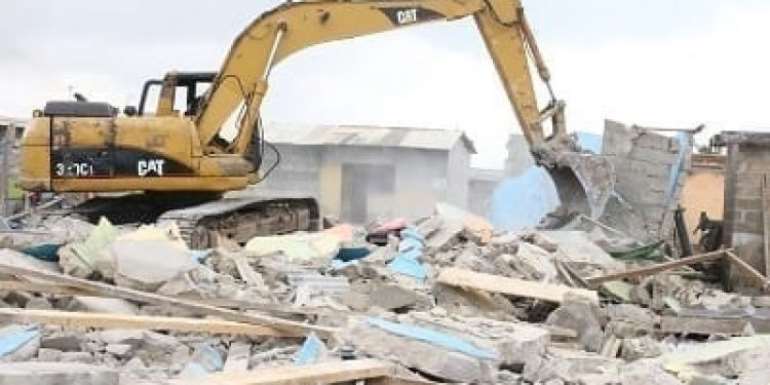 Hundreds of illegal structures mounted on the Obetsebi Lamptey-UTC road in Accra are to be demolished on Tuesday morning by the Accra Metropolitan Assembly (AMA) and the Greater Accra Regional Coordinating Council.

The Greater Accra Regional Minister, Henry Quarter, said the exercise, which will include a clean-up exercise in the city, the evacuation of encroachers, and the pulling down of unauthorized erections, is expected to help ease traffic congestion in the city.

“We will be cleaning and decongesting the stretch from Obetsebi Lamptey to the UTC area. In all, about 610 men and women, drawn from the security and intelligence agencies will take part in the exercise. The three assemblies, which include the AMA, will also deploy staff to join. All put together, we are likely to have close to about 850 men and women join the exercise.”

In a bid to tackle flooding and other problems, the AMA and security agencies have embarked on a number of demolition exercises in some parts of the Greater Accra Region.

More than 40 houses and structures at the Green Belt site, close to the Weija Dam, were recently demolished by the Ga South Municipal Authority (GSMA).

The demolition followed several warnings by the Municipal authority against such illegal structures to protect the dam.

Some structures on waterways, greenbelts and wetlands were also demolished by the Tema West Metropolitan Assembly in preparation for the rainy season.

The Tema West Municipal Chief Executive, Mrs. Adwoa Amoako, who announced this, said the exercise was to pave way for rainwater to flow freely from communities in the municipality.

AHF: Six Reasons Why WHO Chief Should Go

Will you also refer Tsatsu to the GLC as you did against Ayine? – Kwaku Azar to CJ

Armah-Kofi Buah wants responsibility to be laid where it belongs

GPGC judgement debt: Armah-Kofi Buah wants responsibility to be laid where it belongs