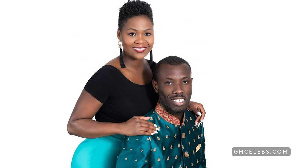 Barbara Tommey was shot seven times by her husband

Ghana’s Ambassador to the United States, H.E. Dr. Barfuor Adjei-Barwuah, on Friday, September 18, 2020, placed a call to the family of Barbara Tommey, the 27-year-old Ghanaian who was brutally murdered on Tuesday, September 8, in front of the Navy Federal Credit Union in Orlando, Florida.

Speaking to the parents and siblings of Barbara, the Ambassador extended distinct condolences on behalf of the President of Ghana, H.E. Nana Addo Dankwa Akufo-Addo, the Embassy and the entire Ghanaian Community.

Reiterating his heartfelt sympathies to the bereaved family, the Ambassador said, "We cannot attempt to understand your pain and will not even pretend to comprehend your grieve but it is our fervent prayer that God grants the family peace and comfort during these trying moments."

Barbara Tommey was an assistant manager at the Orlando, Florida branch of Navy Federal Credit Union and was in front of her workplace last Tuesday when she was fatally shot several times by her estranged husband according to authorities in Florida.

The deceased will be laid to rest on Saturday, September 26, 2020 in Orlando, Florida.

La Liga President on Messi's departure: It won't be a drama for us. And his reputation will suffer
Ronaldo is a fan of the UFC. Rooting for Khabib, training with Conor, signed up for all the top fighters
Only Milan have not lost points this season in the top 5 of the European leagues. Aston Villa lost 0:3 in the
🎮 We made a game about Khabib - fight for him and try to fill up Geiji
Tebas about klasiko: the Game of the best teams in the world. The most important match of club football
Leeds forward Bamford scored a hat-trick. He has 6 goals in 6 Premier League games
Moyes on the spectators in the stadiums: People watch matches in cinemas, why can't they do it on the street?
Source https://www.ghanaweb.com/GhanaHomePage/NewsArchive/Ambassador-Adjei-Barwuah-calls-on-family-of-Barbara-Tommey-1064890

How the mention of my name saved my driver from hoodlums: Bobrisky

#LekkiMassacre: “Some Victims Are Unable To Receive Treatment Due To Lack Of X-ray Machine” – IK Osakioduwa Raises Alarm

Election 2020: NPP must win to change the destiny of Ghana - Adwoa Sarfo

Bawumia gives a new twist to the meaning of NPP, NDC positions on ballot paper

Finance Minister presents expenditure on Appropriation to Parliament on Wednesday

This promise by independent candidate, Asiedu Walker will shock you

Why I Am Not Leaving Nigeria Soon: Laycon

FOCAC is a platform of opportunities and mutual benefits, says former Guinea-Bissau PM

Please Don’t Look Up To Celebrities, What Is Famous Is Rarely Wise-Omar Sterling

We Have Performed Better – Awuku

Slovakia begins testing all residents above age of 10 for coronavirus

We are tackling waste and good health of citizens

Prof. Antwi, Frankiln Cudjoe, Teflondon And Others To Speak At AJEOT 2020

“The Supreme Quality Of Leadership Is Integrity”

GFA signs deal with Decathlon as an official retail partner

American Rapper, Busta Rhyme Flaunts His Six-Packs, Encourages Fans Not To Give Up

We will bring back Atuabo Free Port project – Mahama

ECG to deploy drones for operations

DJ Cuppy Breaks Down In Tears; Says She Is ‘Struggling With Emotions’

They Told Us That NPP Dislikes Zongos But Akufo-Addo, Bawumia Have Rather Lifted Us – Zongo Chiefs

Trump wades into GERD dispute, tells Sudan that Egypt ’will blow up’ dam

'We inherited a myriad of economic difficulties' - Dr Bawumia

What Is Famous Is Rarely Wise, Don’t Look Up To Celebrities

“I Have Suffered, My Kids Must Not Suffer” – Small Doctor Reacts To Buhari’s Empty Broadcast

Trumpism may survive, even if Donald Trump loses the US election

Nursing profession should be exclusive right for girls – Chiana Pio

Falz’s ‘This is Nigeria’, Stonebwoy’s ‘Run Go’ & Burna Boy’s ‘Monsters You Made’ trend amid EndSARS protest