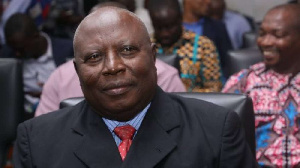 Martin Amidu, the immediate-past Special Prosecutor says he was so much embedded in Akufo-Addo’s perceived anti-corruption agenda that it had to take the Holy Trinity (God the father, the son and the holy spirit) to deliver him of the obsession.

Amidu a devout Catholic says he was head over heels ‘in love’ with then-candidate Akufo-Addo in 2016 as he believed that he was genuinely committed to the fight against corruption.

However, after working closely with Akufo-Addo as Special Prosecutor and touching the Agyapa Royalties deal, God revealed the ‘true colors’ of Akufo-Addo to him as the ‘mother serpent of corruption’.

Amidu recounted in his latest epistle to the president that, this revelation which occurred on the first day of the eleventh month of 2020 was after the president appealed to him to shelve his report on the corruption risk assessment on the Agyapa Royalties deal.

Amidu says it was there that it dawned on him he was fighting a lost battle and that the man he so adored and revered was the ultimate beneficiary of the Agyapa deal which he considers to be the ‘mother of all corruption and corruption related activities’ in the country since independence.

“I became more convinced beyond any further reasonable doubt after my meeting with the president in his Office in the evening of Sunday Ist November 2020, when the President attempted to persuade me to shelve the Agyapa Royalties Limited Transaction anti-corruption report to allow him deal with the matter through a statement to the public, that God (represented by the Holy Trinity in my Catholic faith) was in his divine way revealing to me for the first time, that the President of Ghana only looked like an innocent flow of the fight against corruption And may God, encompassed in the Blessed Holy Trinity be eternally praised for this divine revelation”.

Martin also accused Akufo-Addo of pretending to fight corruption when he is actually a party to it.

Amidu further criticized Akufo-Addo for ‘unconstitutionally’ ordering Auditor-General Yaw Domelevo to go on leave and asked why same was not done to the Municipal Chief Executive for the Bawku Municipal Assembly.

“Mr President, kindly tell Ghanaians your reason for refusing to interdict or order the Municipal Chief Executive for the Bawku Municipal Assembly to vacate her office,, even on voluntary or compulsory leave like you unconstitutionally did to Mr. Daniel Domelevo, the constitutionally appointed Auditor-General of Ghana, after my several pleas with you, and in spite of the fact that the first prosecution witness in the case gave his evidence-in-chief, was cross-examined and discharged on 12th November 2020 in the case of the Republic v Haiia Hawa Ninchema & 7 Others. After informal communications with you to do so failed, I wrote formally to you on 8th September 2020 attaching the interdiction letters of her co-accused public officers who had been interdicted in the same case and stating, inter alia, that: "Your decision is important to vindicate your known commitment to fighting corruption and the promise we exchanged in January 2018 before I accepted to be the Special Prosecutor."

He lamented that "She is still working at her post when her co-accused who are also citizens of Ghana are on interdiction. My dear former "ANTI-CORRUPTION MOSES" this is just one example to remind you, Mr. President, that you should not have unleashed your attack dogs on my integrity as being responsible for the failure of the Special Prosecutor in the fight against corruption under your Presidency. How could I succeed when this single example shows that my former "ANTI-CORRUPTION MOSES" failed me anytime his ox was gored like in the Agyapa Royalties Transactions anti-corruption assessment report. It would come as no surprise to me when all the accused persons in the two pending corruption cases in the High Court since March 20191 left behind are acquitted and discharged after my resignation. Bawku is where I grew up and the people of Bawku know the President's corrupt partisan injustice that she is at post even today while the other public officers are on interdiction".

Andrea Pirlo: In my 1st season at Juve, we were behind Milan, but we took the title. Everything depends on us
The judge made two mistakes. De Gea was pushed and there was no foul on our cancelled-out goal. Solskjaer on the loss to Sheffield
Maguire on the defeat to Sheffield Wednesday: We gave the opponent two goals, we didn't play at the level we expected
Wilder on registration in the Premier League: I don't want to talk about the beginning of an incredible rescue. We just want to show what we are worth
Ronald Koeman: Barcelona in a difficult month with an abundance of outings showed character and deserved their victories
Frankie de Jong: I started to play closer to the penalty area, so I score more
Manchester United's 13-match unbeaten streak in the Premier League was Interrupted
Source https://www.ghanaweb.com/GhanaHomePage/NewsArchive/Amidu-reveals-how-the-Holy-Trinity-opened-his-eyes-to-see-the-true-colours-of-Akufo-Addo-1120643