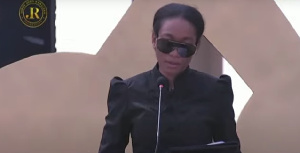 The third daughter of the late former President Rawlings, Amina Rawlings showed a softer side on Wednesday during a touching tribute to his late father.

Amina read the tribute on behalf of her mother, Nana Konadu Agyeman Rawlings at the final funeral rite of the late president in Accra.

The grief-stricken daughter could not hide her tears, moments after she took her turn to pay tribute to the dead statesman.

The emotional tribute described former President Jerry John Rawlings as a man who never spoons feed people regardless of his relationship with them.

“You expected me to prove my worth, by refusing to help my organization financially and challenging me flatly to raise my own funds if I felt the cause was important enough,” the widow’s tribute stated.

She called her late father his ‘hero’ and shared a series of touching family happenings and at one point was seen trying to wipe away tears.

Willian made an assist in Arsenal's third match in a row
The March matches of the South American selection of the 2022 World Cup can take place in a bubble in a European city
Zidane on Benzema before the derby: We won't take any chances. Those who are 100% ready will play
Can you guess a coach based on his career as a player? It's easy with Zidane - but with Flick and Gasperini?
Zidane is categorically against Bale's return to Real Madrid (Defensa Central)
Cunde from Seville is potentially the best defender on the planet. He was inspired by Cannavaro and is very similar to Sergio Ramos
Ibrahimovic returns to the Swedish national team (FotbollDirekt)