Andre Ayew is like a big brother to me - Yan Dhanda 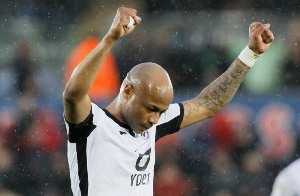 Swansea star Yan Dhanda has tagged Andre Ayew as his big brother and praised the Ghanaian's ability in front of goal.

Since his return to Swansea in 2018, Andre Ayew has been a key part of the side. In the previous season and this one, he has been scoring crucial goals and giving assists as well.

Yan acknowledged this in his interview with Sky Sports News.

"Andre is a goalscorer. He scores goals, and if you put the ball in the box nine times out of 10 Andre is going to be in the right position and he is going to score," Dhanda explains.

"In training, it happens so many times and it was just nice to do that in front of everyone in a proper game because in training it happens all the time. For me to show what I can do in the final third and show some quality and some technique on the cross to find Andre was so nice.

"During the game I felt good, and in the games that I have played, I have felt good and feeling like I am going to create something. And then when Andre heads the ball and it goes in there is no better feeling, knowing you have assisted a goal."

"He called me over when he scored. He celebrated a bit himself first for his good finish but he called me over after! Andre is like a big brother - I know people say it a lot - but he helps me so much, he talks to me so much and gives me advice."

Lampard on 8th place Chelsea: I can handle the pressure
Wegorst-the first in the history of Wolfsburg to score 12 goals in the 1st round of the Bundesliga. He is in the top 3 of the goalscoring race
Bounou is the second goalkeeper of Sevilla after Palop, who blocked 2 + penalties in the La Liga season
Frank Lampard: Back in December, Chelsea were in great shape. I am concerned that we lost it so quickly
Rodgers on Leicester's fight for the championship: It's too early to say, but in the first half of the season we played consistently and at a high level
Only in one season in the Abramovich era did Chelsea score fewer points after 19 rounds than they do now. Then Mourinho was sacked after 16 games
Werner has not scored in 11 games in the Premier League. He has 1 goal in his last 15 games for Chelsea
Source https://www.ghanaweb.com/GhanaHomePage/SportsArchive/Andre-Ayew-is-like-a-big-brother-to-me-Yan-Dhanda-1120796