The Member of Parliament for Ellembele, Emmanuel Armah Kofi Buah is the highest performing MP in the Western and Western North Regions of Ghana, according to the latest survey by an advocacy group in the Western Region; Western Journal.

Emmanuel Armah Kofi Buah polled 32.35 percent out of a group score of 1,827, to top the list of 27 Members of Parliament in the Western and Western North Regions.

Second on the list was George Mireku Duker, who polled 15.54 percent of the group score.

The two retained their respective ranks, on the list for the Western Region. 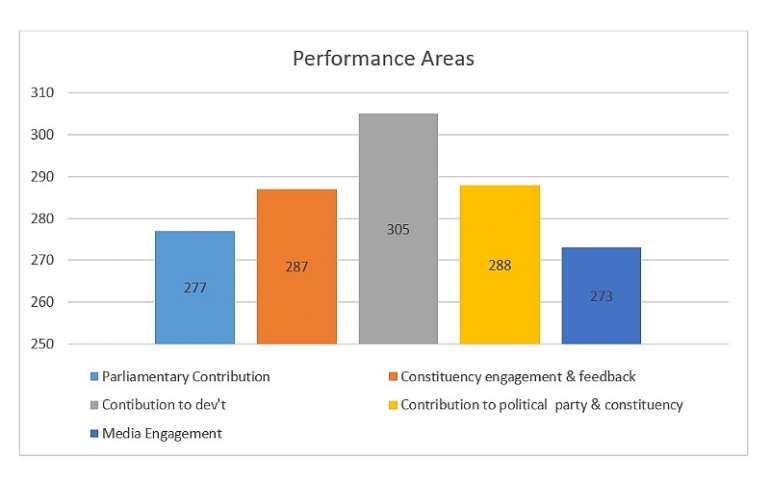 In the Western North Region, Member of Parliament for Bibiani Anhwiaso Bekwai, who is also the Regional Minister, Kinglsey Aboagye-Gyedu ranked first, with a percentage score of 15.38 of the group score.

Member of Parliament for Shama, and Mpohor, (Dr.) Ato Panford and Alexander Kofi Agyekum respectively were last but one, and last, from the bottom of the list with a percentage score of 0.27, each. 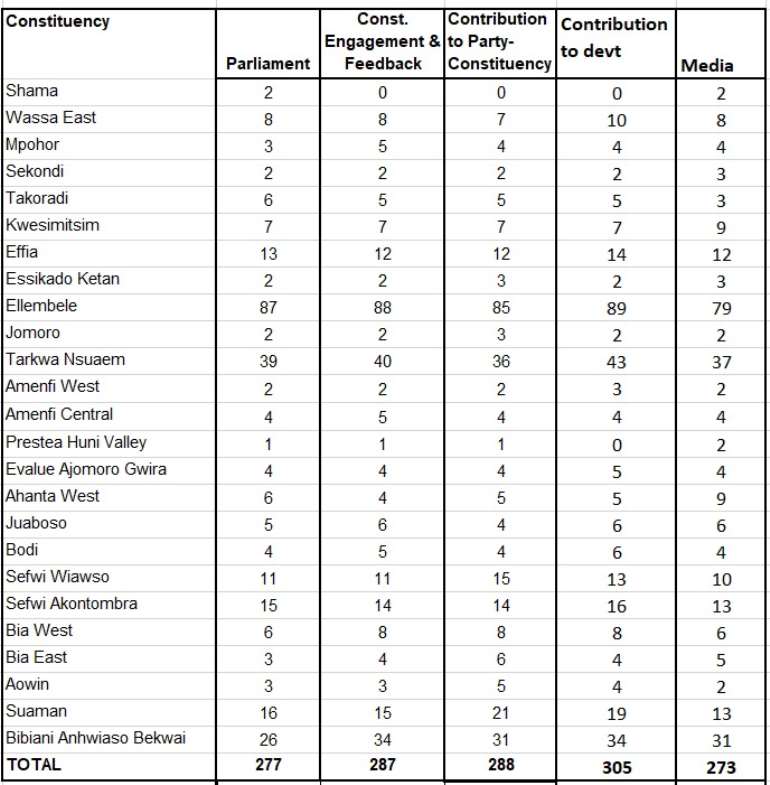 At the end of the poll, a total of 398 respondents were recorded.

Each respondent had a one-time opportunity to vote for his or her 'most impressive' MP over the past three years.

To gain some appreciation into the perception of respondents for their individual and/or collective ratings for the parliamentarians, a checklist of predefined performance areas were introduced into the survey tool.

“Beyond these ratings for the MPs, respondents were asked to determine among a set of predefined performance areas which influenced their ratings. In simple terms, the areas they were most impressed of the MPs performance,” they noted in their published report.

From the survey, most respondents were highly expectant and impressed with the MPs' contribution to the development of the area (with 305 points out of a total of 1,430 responses recorded).

Other factors such as contribution to the political party and constituency affairs, and constituency engagement and feedback were rated 2nd and 3rd most critical areas (with a score of 288 and 287 respectively).

“Surprisingly, the core functions of a legislator, Parliamentary contributions ranked 4th, (with a score of 277) out of the five performance areas. It is important to note that, despite the rankings of the MPs in this survey per their score to the group, there were some varying individual ratings in some performance areas.

“For example, Ellembele MP's score of 32.35% of the group score, came with an 88.1% and 87.13% score in terms of his contribution to development, and constituency engagement, respectively.

These were his best two performances out of the five areas,” the report said.

Your evil plans will kill you

LGBT Rights Activist, Pamela Adie Believes Many Nigerian Women Are In The Closet

Oshiomhole Will Reap Consequences Of His Unruly Behavior: Obaseki

LGBT Rights Activist, Pamela Adie Belives Many Nigerian Women Are In The Closet

DJ Cuppy, Anthony Joshua Mock Each Other As They Try To Speak Yoruba

50,000 Children To Be Vaccinated For Polio In Savannah Region

MCE scores himself 90 per cent in performance

”God Is Lying” – Guy Dismisses Revelation About His Future

NAPO, Adwoa Safo Not Awarded Scholarships Under Our Administration – GETFund

King Promise Reveals Fasting For A Week Before Releasing Any Song

Jeers and boos for Kotoko players after FA Cup defeat

Ghana Movie Awards is a cheat and useless

About 9,860 children are to be immunised in Wa Municipality

Ghanaian publishers and bloggers invited to benefit from GhanaWeb’s technology

Maame Dokono Confesses She Is Not Good In Bed

NUGS calls for investigations into scholarships awarded by GETFund

Government must show the way to gender parity

Kotoko to play matches under floodlights?

Why not show commercials when kids are asleep? – Okraku Mantey to FDA

14 arrested as Zambian police clamp down on ‘gas attacks’

Gambia Massacre: Bodies reburied in Ghana not that of the victims

Doctors Put Government In Tight Corner Over Conditions of Service

No decision to exit LEAP beneficiaries– Director of Social Welfare

Yvonne Nelson’s Baby Daddy, Jamie Roberts Shows Off His New Woman In Style On A Yacht

Car dealers to protest if negotiations with govt fail

‘Kotoko is in a real problem’ – Malik Jabir

We will support local businesses to thrive – Ofosu Ampofo

Boy, 4, collapses after teacher assaults him

Tetteh, others advance to quarters of Olympic qualifier