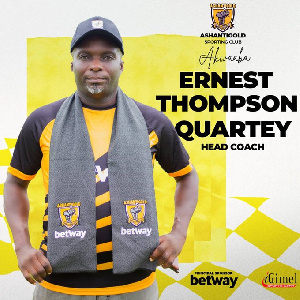 Head coach of Ashantigold, Ernest Thompson has reiterated that his outfit is ready for the start of the 2021/2022 Ghana Premier League season which kicks start on Friday, October 29, 2021.

The miners open their domestic top-flight account with an away game against Techiman Eleven Wonders at the Ohene Ameyaw Park.

Ahead of the season, the former Ebusua Dwarfs trainer who joined the Obuasi-based club recently on a two-year deal said that they are ready for the much-anticipated campaign.

“I say that we are ready for the season. Ashantigold is one of the biggest teams in Ghana and with the exception of Kotoko and Hearts, Ashantigold is the next biggest thing in the country so the expectations are huge.”

“A lot is being expected from the team this season, everything that is needed to be is being done, and I'm okay and happy being here. So, we are only expecting a good time with Ashantigold in the Premier League,” he said.

Use Farmer's Day to address the challenges of farmers

Use Farmer's Day to address the challenges of farmers - PPP