Attempts to manipulate figures an indictment on EC - NDC 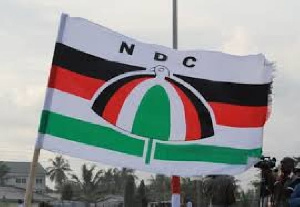 The National Democratic Congress, the largest opposition party, has said the Election Commission is deliberately trying to manipulate the numbers of the just-ended voters registration to favour their opponents the New Patriotic Party and President Akufo-Addo in the December 7 elections.

According to the NDC, the EC deliberately posted false figures of registrants in the Ashanti region to hide the large number of people who registered in the region.

Addressing the Media, the NDC’s Director of Elections said, “These deliberate manipulation of figures which is being described as mistakes would not have been noticed but for the vigilance of our agents and executives across the country. The phenomenon is not only unacceptable but also very indicting on the part of the Electoral Commission.”

Backing his statements with evidence gathered by the NDC against the EC’s data, Elvis Afriyie Ankrah said: “In the Ashanti Region, the EC has so far reduced figures by over 40,000 following our diligence. In the Oti Region, the EC underreported the figures by 10,127 at the end of Phase 2; we drew their attention but the EC continued to publish wrong figures. At the end of Phase 4, the EC under-publish Oti figures by 14,124. So at the end of the exercise, the EC had 226,109 and the NDC had 240, 233.

The NDC further called on the EC to correct their mistakes and publish the actual figures to avert any misunderstanding leading to the General Elections.

Real Madrid will arrive late in San Sebastian. The flight was delayed due to a plane crash
Rubin Slutsk scored a move: four wins in five matches. How will they play Spartak?
Guardiola on city: Working with these players at this club is a joy. The team is in a great mood
Mourinho wants to sign Lingard for Tottenham
Liverpool are not going to sell Oxlade-Chamberlain. Klopp is counting on him
Allegri was a special guest of the Italian dance show
Tottenham players are surprised that Mourinho did not include alli in the squad for the second match in a row. Dele upset
Source https://www.ghanaweb.com/GhanaHomePage/NewsArchive/Attempts-to-manipulate-figures-an-indictment-on-EC-NDC-1033372

Erica, Kiddwaya Cozy Up At A Party (Video)

Currency that never gains gets lifeline from Ghana central bank

‘My Bragging Rights Is That I’m TolaniBaj’, Says Evicted Housemate

If you’ll pay footballers, you should pay my workers too – Bentil chides NDC over promise

No tears for Cardi B over Offset split

Your wasted votes will make me president - Hassan Ayariga to electorates

‘I Will Never Commit Suicide’

Fetish priest in big trouble over missing head of farmer

Mahama pleads with Nananom to caution NPP over electoral violence

Ghana to be exporter of solar - GCPP's Henry Lartey

Policeman killed in highway accident, 3 others in critical condition

#BBNaija: He has gained a lot already as an artist based on Saturday night parties – Neo gives reason why he wants Laycon evicted

Former Chairman of NPP in Mpohor constituency laid to rest

Dos and don’ts of school placement

‘No Matter How Touching Your Story Is, I Won’t Send You Money’

One dead, 3 seriously injured as Police Patrol Vehicle collides with bus in Walewale

‘Your Biggest Flex Should Be Taking Care Of Your Mental Health’

#BBNaija: I once sent a DM to Don Jazzy telling him I can be his Rihanna and he replied – Nengi ( Video)

Presby pastor, two others in critical condition after highway crash at Odumase

CBG has a smooth process to do payouts – MD

15 persons in critical conditions after accident at Konongo-Odumase

I never had a problem with Bale – Zidane

How school placement under CSSPS works

“Linda Ikeji Has All The Exotic Cars, Designer Shoes And Bags In The World But She Hardly Uses Them”

If you are insulting your parents because of Ferrari, they deserve it – Seun Kuti

I’m Mostly Admired By Older Women And They Shower Me With Goodies-Mr. Drew Reveals