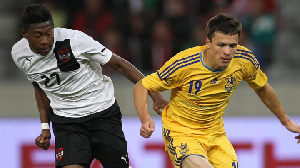 A win for Austria would see them progress with Netherlands

The final round of Euro 2020 group games continues on Monday, with Austria, Ukraine, Finland, Russia and Denmark all vying for a last-16 spot.

Belgium captain Eden Hazard has revealed he is still coming to terms with an injury-hit club season and admits he will struggle to last the whole game against Finland.

Hazard has made two substitute appearances so far at Euro 2020 and will start for Roberto Martinez's side against the Finns in St Petersburg, but the Real Madrid winger conceded his right ankle might never be the same again after three fractures.

Finland head into their final group game daring to dream, with just a victory standing between them and a last-16 berth.

"I think we were maybe the only team that believed that we could be in this position," head coach Markku Kanerva said. "We have dreamt about this. First, we dreamt about qualifying for the Euros, now we are dreaming about going through to the knockout stages."

Ukraine will finish as runners-up behind Netherlands in Group C if they avoid defeat against Austria on Monday in Bucharest, having beaten North Macedonia last time out.

A win for Austria would see them progress with Netherlands and Ukraine coach Andriy Shevchenko knows it will be a tough game.

Austria coach Franco Foda said: "We have it in our hands to reach the round of 16. Marko Arnautovic will be back for our 'final' against Ukraine. We will be ready."

Barca announced on Saturday the 27-year-old will join them on a two-year deal when his current contract with Lyon expires at the end of this month.

Depay has scored one goal in the Netherlands' opening two Group C wins over Ukraine and Austria but has received criticism for his general level of play. De Boer admits sorting his club future outcomes as a relief.

North Macedonia can no longer qualify, having lost their opening two games, but Igor Angelovski wants his side to go out on a high.

"In the second half against Ukraine we were the real North Macedonia and showed that we deserved to be at the European Championship," he said. "This is how we should play against the Dutch. We want to put on a real show and hopefully pick up our first points of the tournament."

Russia coach Stanislav Cherchesov believes his side will be able to shrug off their unfamiliar surroundings to beat Denmark and book their place in the knockout stages of Euro 2020.

Russia go into their final Group B game in Copenhagen sure in the knowledge a second consecutive victory will take them into the last 16 of the tournament.

With his side bolstered by their tight 1-0 win over Finland in their last game, Cherchesov shrugged off the potential difficulties of playing such a crucial game without any of their supporters.

Denmark's loss to Belgium means they need to beat Russia and hope the Belgians do them a favour by seeing off Finland.

The Danes' campaign has been put into sharp perspective by Christian Eriksen's cardiac arrest, but coach Kasper Hjulmand insisted they still harboured hope of progressing in the tournament.

Euro 2020 update is by courtesy BetWay. Bet responsibly. Not open to persons under 18 years.

Millennials and Gen Z eager to get vaccinated in stylish garb

We struggled this season due to lack of finances - Alhaji Gruzah

Govt can rake in GH¢157,680,000 annually with automation of tollbooths

Hajia Alima Mahama: Ghana's first woman ambassador to the US

Go And Remove Your Earrings, Sarkodie Does Not Wear Earrings

If the economy is stable, we’ll feel it in our pockets – Agbana chides Akufo-Addo

Vote out MPs who speak against LGBTQI+ bill - NPP Communicator

NPP issues ‘tough’ code of conduct ahead of primaries

‘I was a proud father and now, I have become a beggar’

Lawyer Nti Says Comedians Are Not Fools In Real Life, “We Deserve To Be Respected” » ™

‘Shielding’ elderly, ill does little to lower COVID-19 in absence of other strategies, study finds

Queen Dee Shower Praises On Afia Schwarzenegger; Says “They Don’t Know Who You Are” » ™