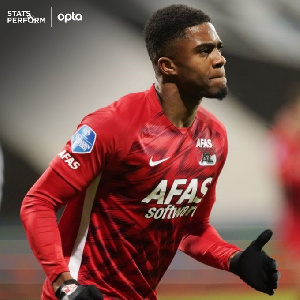 Dutch-born Ghanaian forward Myron Boadu loves the big games in the Dutch Eredivisie after another outstanding performance for AZ Alkmaar against Feyenoord.

The striker bagged a hat-trick as the 2009 champions beat Feyenoord 4-2 on Sunday.

The 20-year-old has impressed against big teams despite enduring a difficult campaign this season.

Boadu has scored ten times in eleven games against the traditional big three in Holland. The player who recently celebrated his birthday has been the go-to-man for AZ in matches against Ajax, PSV and Feyenoord.

The hat-trick over the weekend has increased his tally for the season to 11 goals in 22 matches, sparking AZ to another title fight.

Last season before the halting of the campaign, he was the top goalscorer with 14 goals from 24 matches.

Representatives of Porto insulted and provoked colleagues from Chelsea. The Blues claim that Tuchel did not insult Conceisau
Lukaku is at the level of Lewandowski, Holand and Mbappe. Ex-Inter striker Altobelli about Romelu
Valverde about football in Uruguay: You go to serve a corner, and there is some animal standing next to you
UEFA has no plans to move the Champions League final from Istanbul, despite the coronavirus situation in Turkey
Neymar: Messi is the best I've ever seen, and Mbappe is on his way to becoming one of the best
Solskjaer suggested that the color of the uniform and the stands affected the Manchester United game at home: The players noted that they saw a red shirt on a red background
Mikel Arteta: Whether you are good or not, people outside the club will only evaluate the results

Dormaa East: MP envisages the transformation of the constituency into a model city by 15 years time

Man stabbed to death in Oti

Man stabs Imam to death for sleeping with his wife

I Lost My Mum To Cancer – Peruzzi

Intercede incessantly for the nation

Egyptian court orders US$900 million compensation from Ever Given

This is how much power distributors lose to illegal connections annually

Check out the world’s most powerful passports for 2021

I regret not playing at the World Cup

Akuapem Poloo to undergo pregnancy test after being convicted, remanded

I regret not playing at the World Cup - Hamza Mohammed

Abena Moet Says There Is Nothing Special About Marriage; This Is Why [Video]

I Pity Those Who Follow Commercialised Opinions On Social Media —Keyamo

Seven Years After, Zulum Hopeful Chibok Girls Will Be Rescued

Akuapem Poloo to undergo pregnancy test after being convicted

Akuapem Poloo to undergo pregnancy test as court convicts her

Why 2023 Presidency Slot Should Be Zoned To South-East

Biden to announce withdrawal of U.S. troops from Afghanistan by September 11

“We must change our attitudes towards work” – Kofi Akpaloo to Ghanaians

IDIF: Akufo-Addo commissions phase one of B5 Plus Steel Plant

Afrostylicity: Leading Influencer Marketing Platform Which Flourished even as Others Faltered amidst the Pandemic

Bodyguards for MPs an indication of a failed security system – Akwada