Bawumia is a gem - Ama Busia 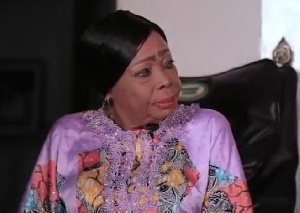 Madam Ama Bame Busia, in a television interview with Okyeman TV, was of the view that Dr. Mahamudu Bawumia is a gem and for that matter, she holds him in high esteem.

“That young man [Bawumia] is a gem. I hold Dr. Bawumia in high esteem and have unwavering faith in him” Madam Ama Busia said during the interview.

However, the demeanour, determination, dedication and competence of Dr. Mahamudu Bawumia changed her mind, resulting in the warm welcome she gave to him.

Vice President Mahamudu Bawumia has, over the years, become a household name due to his prowess in the field of economic management, digitization of the economy and other equally important activities he has undertaken as the Vice President of the Republic.

Prioritize happiness over everything else, Dr. Nitin J Engineer pens his thought

#FixTheCountry: No one should think Ghanaian youths are irrational - Dr. Nyaho-Tamakloe

I don’t know why the borders are still closed - Gatsi

NPP drafts code of conduct for aspirants ahead of internal elections

You are killing us with taxes – Methodist Bishop tells Akufo-Addo

Taliban Has Not Attacked US, Coalition Forces Since May 1

Security agencies asked to collaborate to nib detractors of the country

Mercury can cause defects in babies-Dr. Fameye

The taxes are killing us - Methodist Bishop to Akufo-Addo

Solving The Galamsey Menace In Nine Practical And Sustainable Steps

Euro 2020 countdown: All you need to know about the big show on StarTimes

Inflation rate drifts into single digit of 8.5 per cent in April

Inflation rate drifts into single digit of 8.5% in April

Ejura Camp Prison: How we planted it, the Midas touch of the Church of Pentecost and the Colorful Commissioning

Koforidua GUTA frets over influx of foreigners in retail businesses

We will work for food security reserves – ECOWAS

Ex-soldier sentenced to 20 years for murder in France

Pipeline shutdown prompts ‘panic buying,’ fuel shortages in the US

Mayhem at Amanase as 4 Fetish Priests arrested amidst gunshots

Ugandan parliament dissolved as new term is set to kick off

Parliament to reconvene on May 25 to commence second meeting