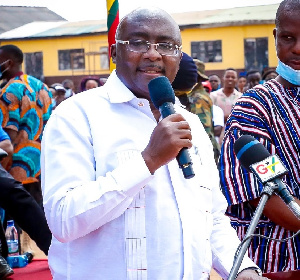 Madam Ama Busia has said that Vice President Dr. Mahamudu Bawumia is more than qualified to lead the New Patriotic Party into the 2024 elections.

In an interview with Raymond Kumah on Okyeman TV, the astute politician and a founding member of the NPP said that looking at how far the party has come and how exemplary Dr. Bawumia has handled his portfolio, it would be more than prudent for the party to select him as its candidate in the 2024 elections.

“Dr. Bawumia is more than qualified to lead the NPP in 2024. The young man is a gem” she stated.

Ama Busia believes that Dr. Mahamudu Bawumia has been formidable in the party, government and keeps playing a crucial role in addressing the needs of the citizens.

Madam Ama Busia who happens to be a sibling of late Kofi Abrefa Busia, a former Prime Minister of Ghana, has been an astounding member of the ruling party.

Her years of dedication and service to the NPP has been recognized on several occasions.

Espanyol relegated to La Liga
Inter have won 14 consecutive Serie A home games. This is a club record
Chelsea extended their unbeaten streak to 7 matches. Next - the game with Arsenal
Raheem Sterling: I had an obvious penalty. I do not know why it was not set
Real Madrid have a chance to become the leader of La Liga-thanks to Barca's perfect zeros with Atletico Madrid
Thomas Tuchel: If City had scored a penalty , there would have been no chance of a comeback. Shocked by Chelsea's reaction
Busquets was diagnosed with a fractured upper jaw