Bawumia will contest for NPP's 2024 flagbearship - Chief of Staff confirms 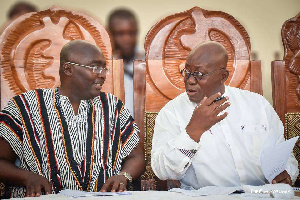 Bawumia will seek to replace his boss, President Akufo-Addo

Vice President Mahamudu Bawumia will contest for the flagbearership of the ruling New Patriotic Party, NPP, when polls are held for successor to President Nana Addo Dankwa Akufo-Addo.

It is the first time that there has been a public admission from Bawumia's office that he will contest to lead the party.

The Veep on Friday, October 15, 2021; presented cash sums to the party structures in the Greater Accra region.

An amount of 20,000 cedis was presented to the regional secretariat whiles 2000 cedis went to each of the 23 constituencies in the region.

Oware stressed that Bawumia's financial donations were strictly out of his strong belief that the party needs to be resourced.

"He is a member of the government, we very well understand that without the party, there is no New Patriotic Party government."

He stressed that, for Bawumia, once the political mandate is secured, party events and structures need to be supported by all government officials.

He said far from campaigning with the donations, he was making them in his personal capacity as an NPP member and sitting VP purely to sustain activities of the party, adding that it will not be the first or the last.

The NPP will hold elections in December 2023 to elect a new flagbearer for the 2024 elections. Other frontrunners include Trade and Industry Minister Alan Kyeremanten and Food and Agriculture Minister, Afriyie Akoto Osei.

Budget approval by Majority unconstitutional, they were not 138 - Minority

Juve see off Salernitana, Atalanta close in on summit

2020 Budget: We have annulled illegality of November 26 - NPP MP

Majority’s precedent will haunt them; their budget approval is ‘illegal’ – Minority

Joe Wise did not vote; he was only counted - Gabby Otchere Darko responds to minority

#TrendingGH: Were Mendy and Lewandowski cheated at 2021 Ballon D'OR Awards?

#TrendingGH: Was Mendy and Lewandowski cheated at 2021 Ballon D'OR Awards?

Majority of businesses employ at most 5 persons - Survey

Number of times majority MPs have ‘ran away’ from a ‘fight’

Your arrogance of power, impunity has resulted in budget rejection – Amidu to Akufo-Addo

Agyapa dropped from budget, some NPP MPs happy – A Plus alleges

5 Ghanaian footballers who could have won Ballon d'Or

People&Places: A look into one of Ghana's biggest museums making waves internationally - Nkyinkyim

Residents of Wa cry over their dark roads at night

4 politicians who have travelled abroad for medical care

2022 budget rejection: Today’s sitting must not be another show down - Gyampo tells majority, minority