Berekum Chelsea coach satisfied with draw against Hearts of Oak 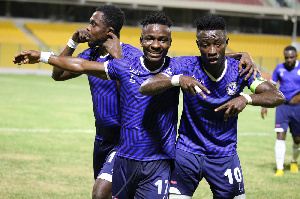 Berekum Chelsea Coach, Seth Hoffman, has said that he is pleased with his side's performance in the goalless draw against his former employer Accra Hearts of Oak.

At a dreaded Golden City Park, the home side created few chances but was unable to find the back of the net.

Emmanuel Clottey thought he had broken the virginity of the game a few minutes after the break but he was ruled offside by the assistant line one.

Coach Seth Hoffman was pleased with his performance even though he felt the referee favoured Accra Hearts of Oak when it came to 50-50 situations.

“I was very much pleased with the discipline of my players. You could see that all the 50-50 incidents in the game went in favour of Hearts yet my players maintained their focus and did the important things in the game,” he said in the post-match interview.

Moreno has scored Villarreal's last 5 goals in La Liga. Best result at the club since Bakambu in 2017
Schalke have not won 10 matches and are last in the Bundesliga. They have 10 points in 24 games
Monchi apologized to Koeman for calling him a whiner. He also apologized to Messi
A player from the 3rd division of Guatemala was disqualified for 5 years for hitting a referee in the face
Benzema can play with Atletico. He returned to the general group of Real Madrid
Leeds midfielder Diaz: Ronaldinho is my childhood idol. He played with joy and spontaneity
Rivaldo: I would like to see Barca's epic comeback against PSG, but I don't believe it. Winning the Cup will not save the season