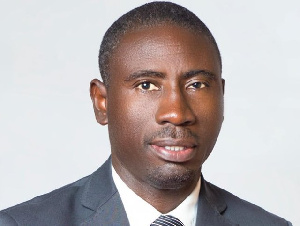 James Kofi Annan, the NDC’s defeated parliamentary candidate for the Effutu constituency in the Central region has blamed his defeat on the claim that the voter register was littered with names of foreigners from neighboring constituencies.

Without that, he said, he would have easily won the elections and has since called on the Electoral Commission (EC) to critically review the names in the register and remove all such names before the next general elections in 2024.

Mr. Annan was defeated by the incumbent New Patriotic Party (NPP) candidate Alexander Afenyo-Markin in the 2020 Effutu Parliamentary Election polling 33,554 votes as against 18,802 by Mr. Annan.

In his words, this is the product of “selfish, fraudulent importation of people from several neighboring constituencies.”

He also described the register as the “Effutu ECOWAS Register”, adding that although he complained about the nature of the register, the EC failed to apply action to his words.

He contended that, in the estimation, since COVID-19 had caused the University of Education, Winneba (UEW), to be shut down, the number of registered voters should have significantly been lower, and not as high as they were, seeing that most of the students had left the constituency.

Also, he alleged that over 17,000 people had been bused from constituencies such as Gomoa West, Gomoa Central, Gomoa East, Ekumfi, Agona East, Awutu Senya West, and Awutu Senya East, contributing to the large numbers.

He added that they had even once intercepted three of such buses filled with some of these persons.

“There is now evidence that our unsuccessful attempts at stopping those voter importations, and possible inappropriate registrations, have resulted in the over-bloating of the Effutu register," he said.

He stated that he and his lawyers are initiating processes at getting the situation remedied, adding that he was ever ready to assist the EC in getting this anomaly resolved.

"I am still talking to my lawyers but the law says if someone is on the register, he must be allowed to vote on election day. Over 17,000 people who are not from Effutu and not resident here were bused to come and register here," he said.

How parliament redeemed itself with orderly, chaos-free voting on three minister-nominees

Judges have a difficult job, I don’t envy them – Tsatsu Tsikata

Why does the NPP always question the nationality of a certain group? – Manasseh Azure asks

We need to hear from our MPs - Adomako Baafi on LGBT

U-20 AFCON: My players have a chance to write history- Karim Zito

Larabanga is 100% Muslim, with no church, gods - Native of Larabanga replies Obiri Boahen

Give us 1D1F - Association of Traditional Healers to Akufo-Addo

Criticise our decisions but don’t malign us – Judiciary tells media

Audit Service board in a ploy to frustrate Domelevo – Vitus Azeem

Over 2,000 refused entry to Ghana from Ivory Coast since January

Kuwait’s ruler swears in new government after clash with legislature

Parliament of Ghana needs more than 6,000 doses of vaccines – Bagbin

Homosexual is against our religious and cultural practice — Young Muslem vex

Ghanaians will suffer if LGBTQI is allowed, tolerated — Bishop Boateng

Association of Garages set March 22 for district and zonal elections

Facebook to end ban on political ads in United States

Speak against the injustice done to Domelevo – NDC organizer to Clergy, CSOs

Parliament will be effective under my watch – Bagbin assures

You're retired; thanks for your service – Akufo-Addo goodbyes Domelevo

You’re retired; thanks for your service – Akufo-Addo to Domelevo