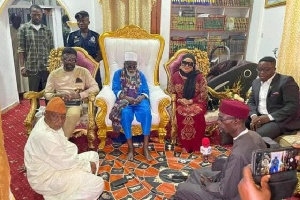 Evangelist Patricia Oduro, who recently publicly renounced her idolatry ways and converted to Christianity, was at the residence of the respected Islamic cleric on Monday, May 10.

She was accompanied by her husband, Pastor Oduro Koranteng and a few others.

She covered her hair with a hijab, a mark of respect for the Chief Imam, who is observing the month of Ramadan.

She was baptized late last month. This followed her arrest and consequent closure of her two television stations, Thunder TV and Ice1 TV by officials of the National Communications Authority (NCA) and National Security.

Smart policing must be adopted in this modern era – Minority

Railways Minister happy with investments in the sector

DJs can generate revenue by performing on songs – DJ Kofi

‘My Body Is 100% Natural; I Maintain It Through Hard Work’ – BBNaija’s Uriel