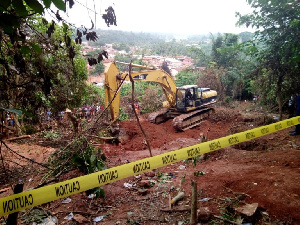 Galamsey activities have destroyed the environment

The Okaikwei Central constituency youth organizer for the New Patriotic Party, Oliver Ofori Baah, has said he feels sad that excavators are being destroyed by the operation halt team.

The young politician speaking on the Frontline show on Rainbow Radio 87.5Fm said, "ever since I saw the burning of the equipment, I have not been a happy man."

Mr Ofori Baah told host Kwabena Agyapong that the burning of the excavators would not solve the problem.

He quizzed: "have you [military] been asked to burn all excavators you seize?”

"Burning the equipment will not solve the problem. It is not the best solution. I feel sad at what is going on,” he decried.

Ofori Baah said mining is not a bad job and if the government wants to regulate the sector especially, small scale mining, it can be done.

Donnarumma passes medical for PSG in Rome
The sad story of the coach who led Denmark to Euro 1992 gold. He did not wait for recognition at home
Dembele will not play at the Euro again due to injury. He has left the French national team
Russian referee Sergey Karasev will work on the Euro 2020 match between Germany and Hungary
The Schmeichels are a unique goalkeeping dynasty. But Casper has long been hampered by the greatness of his father
Laporta about the Super League: The project is alive. We will not apologize to UEFA for being the masters of our own destiny
Barcelona will sell 19-year-old winger de la Fuente to Marseille for 3.5 million euros