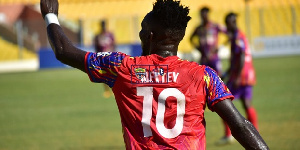 Hearts of Oak midfielder Emmanuel Nettey insists the club have a point to prove when they take on Moroccan side Wydad Casablanca in the Caf Champions League on Sunday.

Back in continental inter-club actions for the first time since 2015, the Phobians first un uphill task to reach the group stage as they are billed to challenge the 2017 champions in the first round.

“We are going out there all guns blazing,” Nettey told Citi Sports.

“We know we have been out of the competition for a very long time.

“We are back and we want to prove a point not just to WAC but to the whole of Africa that we did not make the progression by fluke,’ he revealed ahead of the match.”

Hearts made the first round of the Champions League after a 2-0 victory over Guinean fold CI Kamsar in the preliminary round.

The match was a one-off tie played in Accra, owing to pollical instability in Guinea.

“So far I think it’s been good. Our first game against Kamsar we were able to overcome them by winning 2-0 and we’re progressing,” Nettey told Joy Sports in a separate interview.

“Now we have a much tougher opposition in WAC but I think it’s not too much of a hurdle to cross.

“We are going to do our best, considering the training sessions we’ve had with our technical team. I think everything is going the right way for us Sunday. We’re going to deliver.”

Unlike in the clash with Kamsar, where they had to play behind closed doors, the Phobians will be privileged to welcome back fans in attendance as Caf has approved an intake of 2000 fans for the tie at the Accra Sports Stadium.

“The reason why they [our fans] are asking for tickets [to the game] and stuff is because they’ve missed us, and we too we’ve missed them,” Hearts attacker Daniel Afriyie Barnieh said.

“They’ve missed seeing us on the field of play and we have also missed them in the stands. So what I will tell them is that they should keep on praying and support us, and come in their numbers on Sunday.

“I think we are not going to disappoint them, we will make them proud on Sunday. When we see our fans the morale and everything comes up.”

Hearts have won the Champions League once, whereas WAC have lifted the cup on two occasions.

Use Farmer's Day to address the challenges of farmers

Use Farmer's Day to address the challenges of farmers - PPP