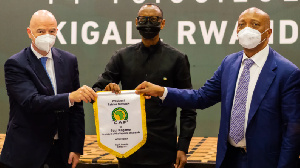 CAF executives in the photograph with Rwanda's president

The Executive Committee (EXCO) also reaffirmed their commitment to good governance, development of football infrastructure and professionalization of refereeing in Africa.

The meeting was joined by HE Paul Kagame, President of the Republic of Rwanda and Minister of Sports, Ms Aurore Mimosa Munyangaju. HE. Paul Kagame delivered a welcoming address to CAF President Dr Patrice Motsepe and FIFA President Gianni Infantino, where he emphasized the relationship between football and development in Africa.

The meeting acknowledged the work that has been done in laying a solid foundation for the CAF-FIFA Pan-African Schools Football Championship and the implementation of the training program aimed at strengthening the professionalization of refereeing in Africa.

The General Secretary Mr Véron Mosengo-Omba informed the CAF Executive Committee about the interim Audit Report from PWC  which was commissioned upon the arrival into the office of the new President Dr Patrice Motsepe and the General Secretary.

In particular, the report found that there are potential irregularities and non-compliance with governance, auditing and ethical procedures in relation to the procurement of services and the conclusion of agreements.

President Patrice Motsepe and the General Secretary expressed their commitment to take appropriate action when the final PWC auditing Report is submitted, to ensure that there is adherence to global best practices in relation to auditing, governance, procurement and tender processes.

The President of CAF informed the Executive Committee of the decision of the Motsepe Foundation to donate USD 10 million to CAF to finance the CAF-Pan-African Schools Football Championship.

The Committee approved the CAF-Pan-African Schools Football Championship as part of the CAF competitions.

The Committee took note, on the basis of a documented presentation, of the state of football infrastructure in the continent and took stock of the needs. The presentation proposed a plan to finance the necessary improvements to the tune of $ 1 billion, which will need to be carefully considered.

Professionalization of match officials in Africa

The EXCO has been informed of the implementation of the training program for an elite body of referees within CAF. This program is as a result of about USD 1 million per year collaboration agreement signed with FIFA. It aims to contract referees who will be paid, monitored and trained by FIFA / CAF technical and physical instructors.

Competitions and other decisions of the Executive Committee

The qualifiers will now take place in the existing windows of September, October and November 2021, and March 2022.

Inter about Eriksen: We wanted it to be a bad dream. We're with you, Chris!
AC Milan wants to sign Ukrainian striker Yaremchuk
The German doctor apologized for quoting Eriksen's first words after regaining consciousness
Euro 2012 is Balotelli's best tournament. It was said that he would reach the level of Messi and Ronaldo, but Mario is remembered only for the iconic celebration
London Mayor thanks Chelsea for helping with vaccination: This is our best weapon against COVID-19
Migration strongly affects the European national teams. They move because of wars, poverty, and their parents' professions
Hungarian ultras hooted like monkeys at Pogba and Kante

I don’t regret decision to move to AS Monaco

2nd Niger Bridge Will Be Completed In 2022