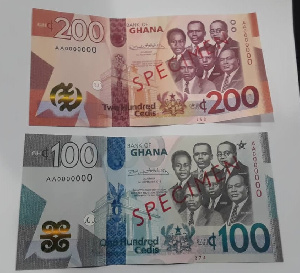 Economist with DataBank, Courage Kingsley Martey is confident the Ghana Cedi will remain stable when compared to its peers on the African continent for the rest of the year, even against the backdrop of the unfolding coronavirus pandemic.

Out of some 15 key currencies on the continent evaluated by Databank, the Cedi remained relatively stable going down by only negative 2.86 percent from January 2020 till now, unlike other currencies.

The Zambian Kwacha and the Nigerian Naira during the same period (January – September) experienced the biggest weakening amongst all the currencies dropping by 29% and 19% respectively, while the West African CFA Franc performed the strongest appreciating by almost 6 percent against the dollar.

Speaking to Citi Business News, Economist with DataBank, Courage Kingsley Martey, attributed the strong performance of the Cedi relative to its peers on the continent, to Ghana’s diverse export base amongst other factors.

“You would realize that when you compare our export diversification relative to our peers, we appear to be a bit more diversified. Look at Nigeria and Angola for instance and you would realize that about 90% of their FX earnings come from crude oil alone, but when you come to Ghana our highest concentration of about 40 % is in gold which is faring well nowadays and bringing in additional windfall.”

“The other thing that has helped the Cedi perform very well this year is the by-weekly FX forward auctions that the Central Bank has been conducting”, he added.

Government’s ability to secure a US$3 billion Eurobond facility earlier this year before the full impact of the COVID-19 pandemic influenced markets sentiments, as well as the coming in of the US$1 billion dollar IMF RCF facility, have been cited as factors that have ensured the availability of foreign exchange on the market and the eventual stability of the local currency.

Commenting on the strength of the Cedi for the rest of the year, Courage Kingsley Martey expressed hope that it will be stable despite the upcoming election season and the Christmas season.

“Hopefully, by the end of the year, even before COCOBOD comes in with the $1.3 billion syndicated loan facility, the Cedi should generally be stable,” he added .

Barcelona are concerned about the shape of the Target. The club believes that he did not work enough on vacation
Laporte was supported by van Dyck: Sorry, bro. No joy, even though we are rivals
Lautaro Martinez: Messi is the best in the world. He is always one step ahead of the rest
The Atletico stadium was painted pink as part of the campaign to fight breast cancer
Frank Lampard: nothing comes easy in the Champions League. This is a great platform to learn new things
Ronaldo was not included in the Juve bid for the match against Dynamo Kyiv
Bruno on the role of captain: I didn't expect it. Tomorrow it's not about me, it's about the team. Everyone should be a leader
Source https://www.ghanaweb.com/GhanaHomePage/NewsArchive/Cedi-s-stability-backed-by-Ghana-s-diverse-export-base-Economist-1063024

#EndSARS: ‘You Deserve This Government If You Disturb Peaceful Protesters’ – Actress Uche Jumbo

Can Partey beat Essien as the PL’s finest Ghanaian?

#EndSARS: Singer Simi speaks against having representatives for dialogue with FG

Election 2020: We're not being manipulated; they'll clap for us after December 7 - EC to doubters

Pickford to avoid retrospective action for tackle on Van Dijk

#EndSARS: ‘The Lives That Have Been Lost Are Priceless’

For Some Of Us, SARS Has Been Beneficial – Gov Sule

“I Run My Race Alone, I Compete With No One” – BBNaija’s Gifty

‘Tremendous Progress’ Has Been Made To Meet Protesters’ Demands, Says Ogunlesi

Appiah, Paintsil, others commiserate with Rawlings after mother’s demise

“Those Inmates In Benin Were Illegally Released By Authorities”

Apostle Adjei has not been reporting to Police- Prosecutor

Pasuma booed, dragged out of #EndSARS protest in Lagos (Video)

Toyin Abraham Calls Out Abike Dabiri For Blocking Her On Twitter

Media has given the NPP free ticket – Mahama on corruption

NGO calls for renewed attention to the plight of rural women

Four suspected assassins to be arraigned on Tuesday

Akufo-Addo to start 3-day working visit to Volta and Oti Regions from Oct. 20

Government to outline its Covid-19 success on Tuesday

John Mahama is committed to the transformation of the Volta Region

Circle Interchange is the longest overpass in West Africa – Mahama

Gov’t to outline its COVID-19 ‘success’ on Tuesday

Jane Campaigns For Dodovi At Suame

Storngman And Daughter In A Dance Battle In This Cute Video

Sarkodie applauds Prez. Akufo-Addo and his government. See what he said about them  » ™

“Join The protest If You Are Not Happy With Your Welfare”

I Will Not Talk About Ghana Again