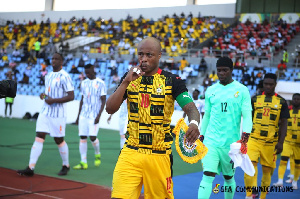 Ayew became a free agent after his contract with the English Championship side Swansea City ended this month.

The Swans failed to keep their top scorer from last season due to his high wages, something both Celtic and Fenerbache will consider before making a move.

Celtic lost the Scottish championship title to rivals Rangers for the first time in ten years, leaving the club at a rebuilding stage as many of their players including captain Scot Brown left at the end of the season.

The Hoops have already earmarked some players in the summer transfer window and Ayew is thought to be the man to lead the new generation.

But the deciding factor for the club is his wages.

Andre Ayew was on an £80,000-a-week wage at Swansea, which is more than Celtic's highest earner last season.

However, with the club expected to pay nothing for his transfer, it is believed they are preparing an offer that will be hard to reject.

They face strong competition from Feberbache, who signed German international Mesut Ozil in January despite his huge salary.