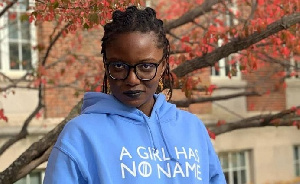 Political parties must put measures in place to encourage women to aim at occupying other important positions within the party than inadvertently limiting them to the Women’s Organiser slot, Dr. Wunpini Fatimata Mohammed, an assistant professor of Global Media Industries at the College of Journalism and Mass Communication at the University of Georgia has advised.

According to her, the culture of women being limited to a portfolio with direct link to the women’s wing is not only obsolete; it fuels assertions that women are not capable enough occupy certain positions in organisations.

Welcoming news of the appointment of Prof. Naana Jane Opoku-Agyemang as the running mate of John Dramani Mahama, the 2020 flagbearer of the National Democratic Congress (NDC), Dr. Wunpini stated that it was heartwarming for a qualified female to have been given the nod.

“This election season is going to be interesting but one of the things I’m scared about is the sexism that we’re going to see. We’ve already started seeing that,” she said while adding that “her nomination is important. It is a big deal within Ghanaian politics… especially for a major political party to do that; that is a lot.”

Dr. Wunpini indicated that a number of women are capable of serving in different capacities within political parties but have not been given the chance to prove their mettle.

She told GhanaWeb: “The NDC and NPP need to change the gender politics embedded in their own political parties. Women should not just be banished to the Women’s Organiser role. They should be encouraged; conditions should be created within the system to make sure that a woman can run for chairperson, secretary of the party and win rather than discourage them.”

The feminist argued that women are mostly denied the opportunity to serve due to the failures of fellow women but wondered why the narrative is not the same when men fail.

“We need to move away from this whole idea that if a woman is elected and they fail, it is a failure for all women. When a man fails in their position of power, it doesn’t become a failure for all men. We need to treat women with the humanity that we afford men,” she advised.

Raheem sterling: Looking for tickets to Lisbon. From the 10th to the 24th. Retweet if you can help
Pep Guardiola: Gabriel is the best player of matches with Real Madrid
Three heroes of Lyon in the match with Juve – among them the defender, whom the fans drove in the fall
Manchester City and Lyon will meet in the 1/4 final of the Champions League on August 15 at Jose Alvalade
Photo of Pep and Zizou – just a gift for Showsport users
Ronaldo was eliminated so early from the Champions League for the first time in 10 years, although he tried very hard – in the playoffs for Juve, only he scores
Rudi Garcia: to Pass Juventus is a feat. The most pleasant defeat in my career
Source https://www.ghanaweb.com/GhanaHomePage/NewsArchive/Change-the-gender-politics-embedded-in-your-camps-Feminist-tells-NPP-NDC-1009135

What a stink! Restaurant in 30 year feud with neighbour over garlic fumes

Ghanaians will judge me - EC boss Jean Mensa to critics

‘Be honest’ - Akufo-Addo swears in six Court of Appeal justices

Bernard Mensah gets a big vouch in Galatasaray move

Street Hustle Accra: A day in the life of an egg seller trying to make ends meet

Politicization of education system cause of WASSCE violence - Mahama

This is the last mass voter registration exercise - EC

We are ready to corporate fully with Police - Bright SHS Management

WATCH: Robot finger attaches to your phone and can even stroke your hand

Sheer stupidity, did you go to school to learn past questions? - Atik chides SHS students

Proprietor for Bright SHS picked up by Police

NPP has no respect for rule of law – NDC Communicator

Gecko places 'a bazillion' phone calls from hospital in Hawaii

I conceived the name 'Kumawood' in a Coffin – Sam Darko reveals

NDC in disarray over Ahwoi’s book

I will protect Ghanaians from COVID-19 -Mahama

How a Rwandan entrepreneur turns beetroot into wine

Moans & Cuddles Ep 10: How far should couples go with their sexual fantasies?

NDC members wishing to go Independent should rescind their decisions

Norwegian man jailed for sawing neighbour's shed in half

School Proprietor invited by Police over assault on WAEC Officials and journalists.

This 2020 election should go beyond the propaganda (1)

Danadams to increase ARV portfolio from monotherapy to combination therapy

Champions League: All the teams that have qualified for quarter-finals so far

Mishasha calls for equality in the music industry

Woman, 28 remanded for causing harm to children under her care.