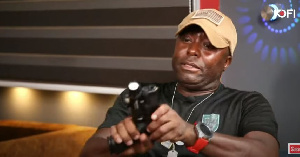 A Ghanaian serving in the US Army has bemoaned the level to which religion has influenced the populace in Ghana.

According to the officer who is known as Killer Kay, political leaders in the country have taken advantage of this development to exploit the populace.

“Some people will take offence to this but I believe it’s just the truth. The government loves where the populace are currently. Everyone is being misled and they are not doing something, it needs to stop. You have all these churches and I am yet to see a separation between the state and the church in Ghana....they want the churches and these voodoo priests to keep them at that level believing Jesus is coming, Nyame beye, ebe fa, ebeye yie, fa ma Nyame and all those things. While they are worried about that, the people in power, I wouldn’t say abuse the resources but they are not really focusing on them,” he said.

As a member of one of the US Army’s Special Forces “Killer Kay” who has been to wars in places like Afghanistan and has seen death in all forms believes there is no way, a spirit or power can stop a bullet from penetrating one’s skin.

The army officer speaking in an interview with Kofi Adoma Nwanwani shared his belief and faith in God.

He, however, stressed that the belief that juju as it is famously called can stop a bullet is only a charade of magic which in an actual sense does not exist.

He, thus, challenged anyone with the ability to stop a bullet to try stopping his bullet.

“I am still looking for the individual here that could catch a bullet, please catch my bullet. You know I met one, they would use the gun and they would shoot themselves but it’s all magic it’s not true. If you understand how guns work, you’ll know that it’s magic, it’s all gunpowder.

“You know back in the days the way they fought the wars is that they dump the gunpowder in there, they pump it there and then they put a round in there. But these guys are doing it without a round. So you guys stand out there and you hear pow, and you go like ei! And I am amazed. Catch my bullet, please let me shoot you,” he stressed.

Watch the interview below:

Non-performing MMDCEs in Accra will be sacked – Minister

Rawlings at 74: Famous quotes by the late J.J Rawlings

EU to lift sanctions against Burundi

Gisele Bündchen turned to yoga in the difficult times

More Covid-19 restrictions in Gauteng? Too little, too late

Today in History: Ghana has not benefited from oil find – GIGS cries

Battle to contain Tsitsikamma fire in the Eastern Cape rages on

“Sarkodie’s English is really bad, he needs to upgrade” – Why Omar Sterling featured M.anifest and not Sarkodie on his new album » ™

5 things you should never do to please a woman

Here are 5 workouts to help you build your abs

SolarWinds hackers could have been waylaid by simple countermeasure

It’s a wrap of season 1 of ‘Dankie, Lottoland’

This is how to check who really sent that marketing SMS

John Mahama has one leg in NPP

DNA machine used in GBV cases has not worked since 2019

Labour Minister storms out of interview over question on child labour

Sugar daddy gets emotional after his girlfriend dumped him

Special accreditation for Hearts of Oak vs Asante Kotoko game

Visitors to Eastern Cape cemeteries warned to be vigilant against criminals

When it comes to skin care, hand cream should be top priority

If EC Chair was indeed a Christian, she would have testified the truth

LGBTQIA+ community mourns the loss of The Raptor Room