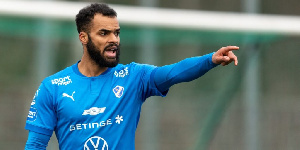 Ghana defender Phil Ofosu-Ayeh will be spending "several months" on the sidelines after tearing his cruciate ligament on his debut for Swedish side Halmstads BK, the club has confirmed.

The former Wolverhampton Wanderers defender had to be replaced in the first half by Edvin Kurtulus after picking a knock in the season opener against BK Hacken.

"We can state that the cruciate ligament is off and that is really bad news for us," sighs HBK manager Magnus Haglund. "Now surgery and then several months of rehabilitation await before Ofosu-Ayeh can be back."

The 29-year-old is expected to undergo a scan to determine the extent of the injury.

Ofosu-Ayeh has struggled with fitness since leaving Germany for England, where he failed to make a Premier League debut for Wolves.

His troubling injury woes seem to continue as he faces time off with the current setback.

Meanwhile, Mikael Boman netted the only goal in the 84th minute as the Allsvenskan returnees started the campaign with a victory.

Ghanaian duo Sadat Karim and Thomas Boakye were all in action for HBK.