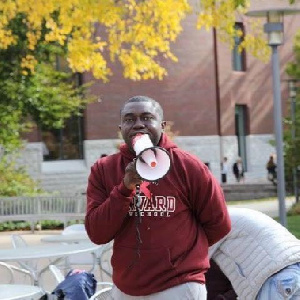 This might go on for quite a while but because it bothers on balance reportage, here is what is new on the back and forth about the claims by the conveners of the #FixTheCountry protest, and, the government.

Following the statement by government denying all the claims made by Oliver Barker-Vormawor, a convener of the protest, that the government cloned the phone of one of its members after they were 'coerced' into a meeting of cabinet ministers, the later has returned with even more questions and details.

In a Facebook post on Oliver's page and sighted by GhanaWeb, questioned the contradictions in the comments made by this latest statement, vis a vis the accounts of Gideon Boako (Spokesperson for the vice president), and the Attorney General, Godfred Dame.

#Neho! I must say that I love that Government offices are open on Sundays. Nana Fixed that for sure. (I have seen my name spelt wrongly in many ways, so ignore the typo in my name; not everything can be fixed at the same time or?)

I expected their predictable response on this issue of tampering with our communication devices. But We will come back to this at a later time; and give a blow by blow account.

1. Gideon Boako (Spokesperson for the Vice President) claimed on national TV and a consequential national programme that he has it on good authority, having been reliably informed; that we lied about our phones been taken away from us. I threw him a challenge, on National TV to resign, if it comes out that he was misleading the public. I offered to resign from any associations with FixTheCohntry as well if it turns out that his account was accurate.

2. Godfred Dame, the Attorney-General and Minister for Justice, also claimed on the same programme that we were leaking information to social media during the meeting. Intimating thereby that we had our phones during and throughout the meeting.

Now their Ministry of Information, by its own statement disputes that account. Do you think either of them will resign or we move?

Anyway, let’s addres this persistent lie that we had being invited for a meeting with the litany of Government Ministers and we voluntarily obliged.

Please journalists, when you are covering this story; ask them, who extended the invitation? When was the invitation extended? And to whom was it extended? How did the reps arrive there?

All the accounts of how we ended up in a meeting with the government and several national security officials were disclosed by us. Everything was on social media.

Let’s engage eachother with respect and honestly! That’s all we ask for.

I am neither for nor against this Government! I am against a culture of impunity that holds democracy hostage.

Do better! Let’s talk meaningfully and with respect.

Let’s really fix this country together if you mean it.

Peter Schmeichel: UEFA has offered the Danish national team three options: to finish immediately, at noon the next day, or to count 0:3. Did the players have a choice?
Spain is learning to play without Ramos, Pique, Carvajal and De Gea (and possibly Alba). On the right in defense-a midfielder, in the center-two left-handers
Rhodri: England could field three teams. They are among the obvious favorites of the Euro
Goalkeeper of the national team of Ukraine Buschan about the match with the Netherlands: I do not consider myself a hero
The match between Denmark and Finland could not be played on the same day. The players didn't have to decide that
A fan fell from the Wembley stand at the England - Croatia match. He is in hospital in a serious condition
Sweden is even glad that Zlatan is not in the Euro. The fans love the team more without him, and the coach is happy when everyone plows