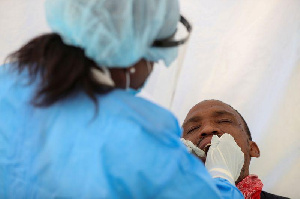 The Ghana Prisons Service has disclosed to GhanaWeb that there are currently no diagnostic tests or facilities available for Coronavirus testing in all the prisons across the country.

According to the Public Relations Officer of the GPS, Supt. Courage Atsem, prisons in Ghana lack PPEs and other testing kits to check the statuses of both new and old inmates.

He explained that health personnel who double as prison officers are deployed at vantage points to assist with screening and other observation protocols.

“The Ghana Prison Service does not have the facilities to do Coronavirus testing on our own, we collaborate with the health directorate in the various municipal and districts to carry out testing for us if need maybe,” he told GhanaWeb in an interview on Thursday, June 18, 2020.

Supt. Courage Atsem further explained that after observations and screening of new inmates, all suspicious cases identified are being transferred to the nearest District Health Directorate.

Following some reported cases of COVID-19 involving three inmates and six prison officers, a section of the general public made calls for mass testing to prevent further spread of the virus.

Addressing the issue, Supt. Atsem noted that “testing must be a general decision, if as a country we decide to test everybody, then inmates will be no exception”. He further stated that “there is no law or legal requirement asking the police to necessarily test all inmates before they bring them to our custody but with collaborations among the two institutions, what is being done now is that the police take them for testing before they are being brought to us (prison) but it is not a requirement”.

As part of the latest prison requirement, new inmates have to undergo the mandatory 14-day isolation before they are transferred to the main cells. He explained that the prison administration has allocated 7 prison facilities across the country to accommodate new inmates.

“We have created separate prisons for only new admissions so that we minimize the risk of having them transmitting the virus to the old ones… when they bring them to our custody we find out if they’ve been tested or not and depending on the answers we get, we take it from there,” Supt. Courage Atsem told GhanaWeb.

Icardi on leaving Inter: PSG-a step forward. I want to win trophies
Giress about the Best-2019 award: Mane should have been ahead of Messi
Lovestory Totti and Ilari Blasi: he dedicated goals to her in the Derby, she dissuaded him from moving to Real Madrid (and had a row with Spalletti)
Eric Djemba-Djemba: Pogba and Brunu would have sat in the reserves under Scholes and Keane
Klopp on the championship: I would never compare myself to Dalgliesh and Shankly
Dimitar Berbatov: Earlier it was about the championship of Manchester United, now it is about the top 4
Zidane wants to see Mane at Real Madrid, but the club cannot afford this transfer
Source https://www.ghanaweb.com/GhanaHomePage/NewsArchive/Coronavirus-Ghana-Prisons-Service-unable-to-test-all-new-inmates-PRO-983926

Residents of Otoase appeal for help to rebuild their houses

Voters registration: 'Our data shows that over 500,000 people have registered so far' - NPP

Entrepreneurship, innovation are key to economic revival after coronavirus - Akufo-Addo

Drivers incur heavy losses, push for restrictions to be relaxed

‘I Am Allergic To Being Broke’

Voter Registration: EC To Use Chits To Enforce Social Distancing

Oppong Nkrumah now lies for politicians - A Plus

MOG, Daughters For Celebration Of His Grace Concert

With no infrastructure and proper structures, I cannot become Kotoko CEO- Marcel Desailly

Organisers of ‘The Spelling Bee-Gh’ warn parents of fraudster

Register And Let There Be Peace

What Is The Next NDC STUNT?

10 years after that penalty miss: Asamoah Gyan craves second chance to redeem himself

Be sensitive to mood of border dwellers - Rawlings to army patrols

12 Facilities Being Upgraded Nationwide For Covid-19