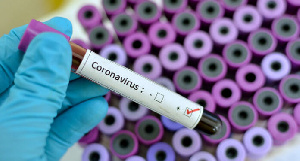 Ghana's COVID-19 active cases have seen a further surge to 2,799 on Saturday following the confirmation of 635 new cases of infections.

This is from a previous case count of 2,413, the Ghana Health Service has announced.

This means that the country for a successive day running had recorded more than 600 new infections following the confirmation of 658 on Friday.

The new infections are from tests conducted as at January 19, 2021.

The latest update by the GHS said a total of 56,955 patients had recovered from the disease and been discharged.

Ninety-two cases, it said, were in severe conditions with 21 critical. The active cases were being managed at treatment and isolation centers across the country, while some were under home management.

The death toll, however, remained at 361 since the last update.

Ghana has so far recorded 60,115 cases of the Covid-19 since the first two cases were confirmed in March 2020.

Out of the total confirmed cases, 23,498 were from the General Surveillance; 35,579 from Enhanced Contact Tracing, while 1,038 have been recorded from international travelers disembarking at the Kotoka International Airport since it was reopened on September 1, 2020, the update said.

A total of 730,557 tests have been conducted so far, out of which 228,472 are from routine surveillance, 362,333 from contact tracing, and 139,752 from international travellers arriving at the Kotoka International Airport. The positivity rate is 8.2 per cent.

The Greater Accra and the Ashanti regions continue to be the epicentres of the virus in the country with cumulative cases of 34,255 and 11,612 respectively.

Messi scored his 13th goal in La Liga in 2021 - the best result of the top 5 leagues in Europe. Levandowski has a goal less
Bale has scored 4 (2+2) points in his last three matches for Tottenham
Messi scored in the 7th La Liga match in a row and led the list of scorers
Promes returned to Spartak - what do we expect from him?
Javier Mascherano: Barcelona is a special club. It is difficult to find a team with the same ingrained philosophy
Dybala flew to Barcelona for a checkup with a surgeon. He is still concerned about a knee injury
Everton have extended their contract with Ding until 2025
Source https://www.ghanaweb.com/GhanaHomePage/NewsArchive/Coronavirus-Ghana-records-more-than-600-daily-infections-1162399

Akeredolu Sworn In For Second Term

I have a sugar mummy and we are both happy

Railway sector has been left deplorable for years - Peter Amewu