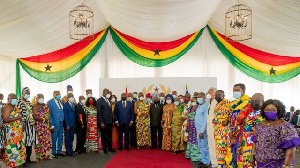 Members of the Council of State

Anti-Corruption campaigner and Executive Director of Ghana Integrity Initiative (GII), Vitus Azeem says he is not sure of the capacity of the Council of State in the fight against corruption.

He believes the Council can only contribute to the fight as an advisory body but has no powers to fight the menace as stated by the President during their (Council of State) swearing in ceremony.

“We still have challenges of the phenomenon of illegal mining, popularly referred to as ‘galamsey’, corruption in public life, and we need to enhance the efficiency of the State’s administrative machinery. In all these, I expect you to be proactive partners in our common efforts to find solutions that will improve the lives of our people, and safeguard the integrity of our nation and its heritage.”

These were the words of the President of the Republic, Nana Addo Dankwa Akufo-Addo, on Tuesday, 23rd February 2021, when he swore into office members of the Council of State, at a ceremony at Jubilee House, the seat of the nation’s presidency.

With the existence of a National Anti-Corruption action plan, Vitus expects the appropriate bodies to act upon information they receive on corruption and punish public officials to serve as a deterrent to others.

He believes a fundamental problem to the fight against corruption is the shelving of investigations and the non-prosecution of culprits.

“Sometimes we investigate cases of corruption and shelf reports from them and do not even act upon the recommendations given. This has been our problem all this while when it comes to the fight against corruption”, he said.

According to the Ghana Corruption Report, corruption poses an obstacle for businesses operating or planning to invest in Ghana. Nonetheless, corruption levels in Ghana remain low compared to other African countries. Low-level government employees are known to ask for a ‘dash’ (tip) in return for facilitating license and permit applications. Ghanaian anti-corruption law is primarily contained in the Criminal Code, which criminalizes active and passive bribery, extortion, willful exploitation of public office, use of public office for private gain and bribery of foreign public officials.

The Public Procurement Act, the Financial Administration Act, and the Internal Audit Agency Act have been introduced to promote public sector accountability and to combat corruption. The government has a strong anti-corruption legal framework in place but faces challenges of enforcement. Gifts and other gratuities offered to civil servants with the aim of influencing their duties are illegal, nonetheless, facilitation payments are not defined in law.

GPL WK19: Hearts fall in Obuasi as Kotoko climbs to the top

Kweku Baako’s mother to be buried on April 15

NMC must do better in regulating media – Sulemana Braimah

New e-payment platforms to be introduced by GPHA

Richard Commey gets 2-year ban from GBA for peddling lies

McLaren Elva test: What it’s like to drive a supercar with no windows

Take long drives – or: How to keep your car battery healthy

Get your socks off: They’re a great way to clean your bike’s chain

From timing belts to paint colours: Nine tips for buying a used car

Cologne parts ways with coach Gisdol after loss to Mainz

When you emotionally invest in a relationship, you do the unthinkable when things go wrong — Lecturer

We will not allow you to collapse NLA – PRO

‘Begging on the streets robs PWDs of their dignity’

Presidential election kicks off in Chad

Death toll of tropical cyclone Seroja rises to 174 in Indonesia

Kenya’s elephant number increases at 2.8 percent annually in past 30 years amid fall in poaching