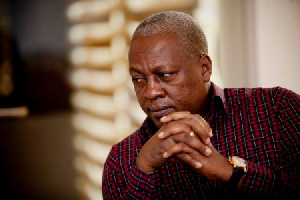 The flagbearer of the National Democratic Congress in the 2020 elections has observed that the Supreme Court dismissed their case after taking the party's General Secretary, Johnson Asiedu Nketia’s testimony out of context.

The Supreme Court of Ghana on March 4, 2021, ruled on the Election Petition of Mr. Mahama vs the Electoral Commission and President Akufo-Addo.

The SC in its ruling upheld the re-election of Nana Addo Dankwa Akufo-Addo as President of Ghana.

Speaking for the first time after the ruling on Thursday evening, Mr. Mahama indicated that Asiedu Nketia's testimony was misconstrued by the judges.

He noted that the General Secretary was treated like a star witness to the benefit of the 1st and 2nd Respondents - Electoral Commission and President Akufo-Addo respectively.

“I listened to the testimony of our General Secretary, Asiedu Nketia from beginning to end. I’m quite alarmed at the mutilation of his testimony in the Supreme Court ruling,” John Mahama said as monitored by GhanaWeb.

He added, “Indeed, the ruling I heard today virtually makes our witness Johnson Asiedu Nketia as the star witness of the 1st and 2nd Respondents. Many answers in his cross-examination were taken out of context for the dismissal of our election petition.”

The NDC flagbearer also noted that he was not surprised by the ruling of the SC since the EC Chair, Jean Mensa was not allowed to testify.

Messi fights with a robot, Real Madrid against 109 children, Medvedeva dances to Sailor Moon - this is the madness of Japanese TV shows
At the World Cup in Qatar in 2022, it is planned to vaccinate all participants of the tournament against coronavirus, said the Minister of Foreign Affairs of Qatar, Mohammed bin Abderrahman al-Thani
Giorgio Chiellini: If Ronaldo is a problem, then I would like to have more of those problems
Kane injured his ankle in the match against Everton
Kane became the record holder for the most goals in the Premier League for players without a title, beating Fowler
Ancelotti's 2-2 win over Tottenham: One of Everton's best home games. The fate of entering the European Cup will be decided in the last game
Mourinho on Pogba's words about him: I don't care what he says. Not Interesting

Volta Rail Bridge to be completed in August - Railways Minister

'National dialogue needless in the fight against galamsey' – Bobby Banson