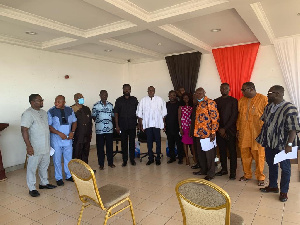 Representatives from the Agumenu and Allied families with the support of the Volta Regional Leadership of the NDC paid a courtesy call on the leadership of NDC National FEC at the party's headquarters in Accra on Wednesday 12 May 2021, to formally inform them of the demise of the late Mr Churchill Simon Kwabla Agumenu, a veteran member of the National Democratic Congress.

The late C.S.K Agumenu who is the father of Dr Donald Senanu Agumenu was an astute educationist, a Cadre of the PNDC, Secretary and Adviser to the Ave-Tagba Traditional Area. Mr Agumenu was a highly respected man of integrity and a source of wisdom to many beyond the region. He was the family head of the Agumenu family.

The National Chairman of the NDC, Hon Dr Samuel Ofosu Ampofo in his remarks expressed his sincere condolences to the bereaved family especially Dr Donald Agumenu whom he said, who served the NDC at a very high level as Senior Political Aid to our late Founder H.E. J.J Rawlings.

Chairman Ampofo further stated that the level of confidence reposed in Dr Agumenu by our late founder on whose behalf he attended very high profile meetings including Council of Elders meetings, gave him a glimpse of how weighty his father was like even though he personally did not have an encounter with him.

On his part, the National Vice Chairman of the NDC, Hon Kofi Attoh extolled the record of the late C.S.K Agumenu for his services to the PNDC/NDC and the nation at large and praised his son, Dr Donald Agumenu for his commitment to the course of the party through his dedicated service to the late founder J.J. Rawlings and his active participation in party activities at the grassroots level.

The National Chairman in his closing remarks expressed the readiness of the party leadership to positively respond to the funeral invitation so as to accord the late C.S.K Agumenu a befitting farewell at the funeral Church service slated for Saturday 22nd May 2021, at Ave-Hevi in the Akatsi North District of the Volta Region.

The Agumenu and Allied families paid a similar visit to His Royal Majesty Eze Dr Chukwudi Jude Ihenetu, King of Igbo Community in Ghana, who extolled the late C.S.K. Agumenu for bequeathing to humanity well-accomplished children like Dr Donald Agumenu with whom his kingdom has a warm and cordial friendship and relationship for a long time.

As part of Ewe tradition, a similar visit was paid to Zikpitor Hon. Dan Abodakpi, the Stool Father of the Anlo State to officially announce the final funeral rights and burial service to him.

Inter about Eriksen: We wanted it to be a bad dream. We're with you, Chris!
AC Milan wants to sign Ukrainian striker Yaremchuk
The German doctor apologized for quoting Eriksen's first words after regaining consciousness
Euro 2012 is Balotelli's best tournament. It was said that he would reach the level of Messi and Ronaldo, but Mario is remembered only for the iconic celebration
London Mayor thanks Chelsea for helping with vaccination: This is our best weapon against COVID-19
Migration strongly affects the European national teams. They move because of wars, poverty, and their parents' professions
Hungarian ultras hooted like monkeys at Pogba and Kante

I don’t regret decision to move to AS Monaco

2nd Niger Bridge Will Be Completed In 2022