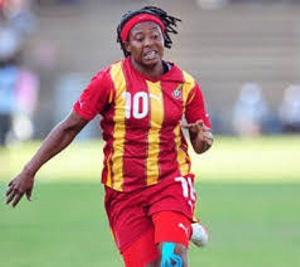 Former Ghanaian female footballer, Ajoa Bayo, has admonished the current crop of players for the various female national teams to play their hearts out when representing the nation.

The former Ghanaian international went on to say that the current girls do not play for the nation and are sometimes soft on the ball because during their time they use to play hard and always put the nation at heart.

She was reacting to the match between the Black Princesses and their Moroccan counterparts at the Accra Sports Stadium on Thursday.

She opined that the girls appeared not patriotic and not committed to the game.

Adjoa Bayo has played for Ghatel Ladies in Accra, Ghana, and has also played for FC Indiana in the United States.

In September 2007 Adjoa Bayor captained the Ghana national team at the World Cup in China.

Although Ghana did not get out of the group stage, Bayor scored a remarkable goal from a free-kick just outside Norway’s penalty.

In 2003 she won the female African Player of the Year she was also shortlisted for the best female African player in 2010 which she eventually won beating the likely favourite, Perpetual Nkwocha.

She was selected in 2018 by CAF to assist Deputy Secretary in football and development Anthony Baffoe to conduct the draw for the Africa Women Cup of Nations.

When asked if given the opportunity to serve in the women’s national team, she giggled but she said she is ever ready to serve.

Lampard on 8th place Chelsea: I can handle the pressure
Wegorst-the first in the history of Wolfsburg to score 12 goals in the 1st round of the Bundesliga. He is in the top 3 of the goalscoring race
Bounou is the second goalkeeper of Sevilla after Palop, who blocked 2 + penalties in the La Liga season
Frank Lampard: Back in December, Chelsea were in great shape. I am concerned that we lost it so quickly
Rodgers on Leicester's fight for the championship: It's too early to say, but in the first half of the season we played consistently and at a high level
Only in one season in the Abramovich era did Chelsea score fewer points after 19 rounds than they do now. Then Mourinho was sacked after 16 games
Werner has not scored in 11 games in the Premier League. He has 1 goal in his last 15 games for Chelsea
Source https://www.ghanaweb.com/GhanaHomePage/SportsArchive/Current-female-players-not-patriotic-enough-Adjoa-Bayo-1120634