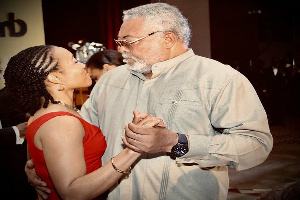 The first daughter of the late former president, Jerry John Rawlings, Dr, Zanetor Agyeman-Rawlings, has eulogized her father, revealing how she wondered often that as a single man, he was able to welcome so many people into his life.

She added that notwithstanding that fact, he always still had so much more room for others, never tiring from relating to people from all walks of life.

“I never could fathom how you managed to have such a personal relationship with so many people from so many walks of life and still have room for more! Each person had a personal story to tell of how you impacted their lives,” she read.

Dr. Zanetor Rawlings explained further that such attributes of her late father exemplified what a rare gift of life he was.

“And somehow, each person whose life you touched felt like you left them with more than when they first met you. What a rare gift! What a blessing!” she said.

She said these in a tribute she read on behalf of her and her siblings in memory of their late father, Flt. Lt. Jerry John Rawlings, during the funeral service of the former statesman at the Black Star Square in Accra.

Jerry Rawlings died after a short illness while on admission at the Korle Bu Teaching Hospital in Accra, on Thursday, November 12, 2020.

Antonio Conte: Inter were 15 points behind Juve before I arrived. We are developing
Zinedine Zidane: Real Madrid are good, they have regained their confidence. With Sociedad, we must play as we know how
Mourinho on 4-0 with Burnley: The victory was needed for the sake of the smiles of the Tottenham players. Happy with Bale
Bale after Burnley double: My form is coming back. We must work hard and not talk nonsense
Golovin scores points every 32 minutes in 2021 - best result in Ligue 1
Beckham on Messi and Ronaldo: These are the players we want to sign at Inter Miami
Arteta after 3-1 with Leicester: Arsenal are unacceptably low in the table. We need to improve the situation
Source https://www.ghanaweb.com/GhanaHomePage/NewsArchive/Daddy-accommodated-so-many-people-and-still-had-room-for-more-Zanetor-1165075

Fauci says of Johnson & Johnson Covid-19 vaccine: ‘I would take it’

Fan arrested for pulling a knife at Kotoko vs Hearts match

Atalanta hit back at Sampdoria to move fourth in Serie A |

‘Sweating while working out is not fat-burning’

Principal calls for completion of projects

Two Districts in Central Region to benefit from COVID-19 vaccination

We will clamp down on LGBT+ Practices in Ghana – IGP

Ghanaians Bow To Efya’s Greatness After Her Masterpiece On UTV » ™

Mercy Johnson Reacts As Fan Asks Her To Have More Children

LGBTQ+ will not be taught in schools – Nii Kpakpo Somoa

Arsenal hit back to beat Leicester, Fulham held at Palace |

Keep the peace after petition judgement – NPC to Mahama, Akufo-Addo

We Won’t Accept Your LGBTQI, Don’t Dictate To Us

Gather boldness, confidence to speak against situation that challenges you - Duncan Williams

It’s time to speak to our challenges – Duncan Williams

Election Petition: 'E be ye pinsooo' for dead goat or lame horse and its vulture-allies next week — Koku Anyidoho jabs

Conspiracy Theories Against Covid-19 Vaccines Has No Scientific Basis – NCCE

Koku Anyidoho abandoned me after accident; told our son I'll kill him - Wife

80% Of Marriages In Lagos Are Not Working

Conspiracy Theories against COVID-19 Vaccines have no scientific basis—NCCE

$84m Pokuase Interchange nears completion, project to be ready on this date