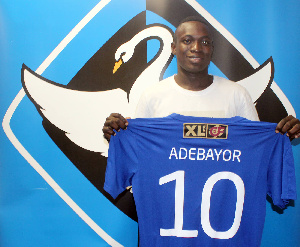 Danish outfit, HB Koge has confirmed that they have transferred Victorien Adebayor to Ghana Premier League side Legon Cities FC on loan for the rest of the season.

The club last year signed the Nigerian international from Inter Allies FC after keeping tabs on his outstanding performances in the Ghanaian top-flight league.

Yet to cement a place in the starting eleven of the Danish lower-tier league, Victorien Adebayor is now on the move.

As reported by footballghana.com earlier today, Legon Cities FC has decided to bring him to the club to provide a squad boost for the side in the ongoing Ghana Premier League season.

Just this afternoon, HB Koge with an official statement has confirmed that they have indeed transferred the attacker.

“HB Køge has made an agreement with the Ghanaian club Legon Cities FC. The deal means striker Victorien Adebayor will be loaned out to Legon Cities, who play in the Ghanaian Premier League. The lease is valid for the rest of the year,” the Danish Club said on Thursday.

He will hope to display a similar form to help Legon Cities FC achieve their aim at the end of the season.

Arteta that Arsenal should not have been called to the Super League: We are one of the best clubs in the world. There is no denying the story
Man City have agreed to transfer 17-year-old winger Fluminense Kaiki for 12 million euros
Fonseca on 1:1 with Atalanta: Roma was better in the second half and showed character
Five years ago, esports was building its own Super League. The project failed due to the dissatisfaction of the players
Keylor Navas is the best Ligue 1 player in March
Rodgers on 3-0 with West Brom: Leicester can play much better
Sorokin on the additional Euro matches in St. Petersburg: The decision should be made at the political level. While it is not accepted