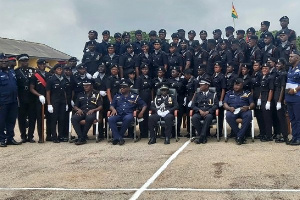 He has also charged the youth not to allow themselves to be used by politicians as puppets to foment trouble before, during and after the elections.

“Stay away from acts that can gain you the only reputation of being called a troublemaker in elections,” he told Ghanaian youth at a passing-out ceremony for police recruits in Kumasi.

One hundred and sixty-eight (168) recruits made up of 99 females and 69 males, passed out at the ceremony.

COP Duku said the police were ready to unmask and strip any mobster or fugitive of his or her political colouration swiftly, and bring such people to book.

He said the passing-out of the recruits had come at a very timely hour as the country was preparing itself to go to an election.

These recruits were going to complement efforts by the police administration towards ensuring adequate police presence in polling centres to enhance peaceful polls in all parts of the country.

COP Duku explained that the six months training in musketry, drill and classroom work would equip the recruits to discharge their duties effectively.

Ex-coach of Fiorentina and Bordeaux Paulo Sousa took charge of the Polish national team
Mandzukic on Milan and Zlatan: It is important to instill fear in your opponents. We have a lot of experience
The football Association of the Czech Republic said that Bican 821 scored a goal. Ronaldo has 760
The youngster is Interested in Arsenal lease. He decides together with his family
Against Barcelona in the Cup - a small Catalan club that has already knocked out Atletico. Here we picked up and launched the career of Alba
Aguero has contracted the coronavirus
Pogba on the 1st place in the Premier League: Manchester United is still far from the trophy. This is not enough
Source https://www.ghanaweb.com/GhanaHomePage/NewsArchive/Desist-from-offering-party-identity-to-people-to-cause-violence-COP-Duku-1120403

Fire breaks out at Serum Institute of India, but Covid-19 vaccine production not affected

Why I Didn’t Perform ‘WAP’ At Biden, Harris Inauguration

AMA distributes items to support ‘My First Day at School’

Live by your word, don't be partisan! - Kabilla cautions Speaker of Parliament

Reopening of schools was done in a rush - GCNH

Johnson Smith explains why he played six defenders against Dwarfs

Farmer remanded for butchering a farmer at Amenhyia

Manhyia Palace Museum closes down to make way for renovations

Coronavirus: We have not given up on making our own vaccine – Ghana Health Service

Honeymoon Part 2 – Stonebwoy And His Wife Dr. Louisa Cool Off In Jamaica And Spend Quality Time Together » ™

Coronavirus: Frontline worker who tested positive recounts the bad treatment meted out to him

Introduction of COVID-19 vaccines will be based on effectiveness, availability

2021 BECE for private candidates to begin in April

You told us to judge 120 ministers by the result, why reduce the number? – Braimah asks Akufo-Addo

FLASHBACK: Number of times babies were stolen from hospitals

There is no money in Ghana football - Kosta Papic

You are irresponsible if you smoke, drink but can't buy face masks for your children - NPP Secretary

Solution to the problems of Zongos is not Astro Turfs – Suhuyini

I'm proud of my team despite defeat to Kotoko - Dwarfs coach

‘I Get Gifts Because I’m Doing Something Right’

How a mother sold her baby for GH¢8,000 – EOCO Director gives details

I gave you everything – Paul Dogboe to Isaac Dogboe

‘So Many People Force This Creative Mission’- Stonebwoy On Underground Artistes

Avoid over enrollment of school pupils- Director of Education